This would be my third attempt at the Circuit of Bath walk since 2014, as I opted to participate in a different event on the same day last year. 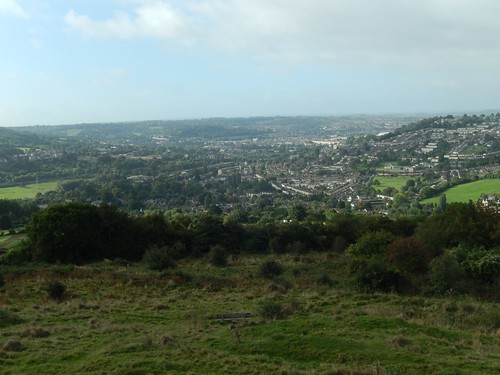 It’s an annual event organised and in support of the charity Julian House. For my third year, I would again be looking to tackle the full twenty-miles of the circuit that surrounds the city.

Having walked anti-clockwise from Lansdown on my last completion of this event, I decided that, this year, I would repeat the route of my first year; setting off from Newbridge Park and Ride at around 8am, in a clockwise direction. 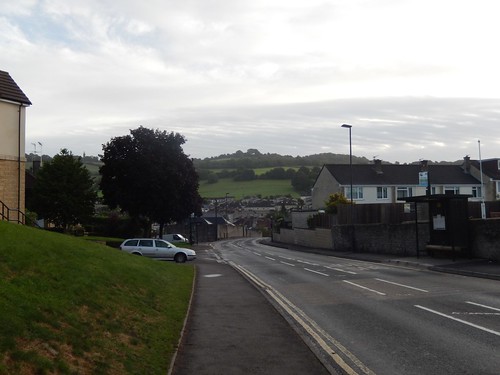 As well as being able to follow the walk in either direction, you can start from one of several checkpoints. A major benefit of beginning at Newbridge and heading towards Lansdown is that you defeat the very worst of the hills early on… That walk I did in 2014 was definitely the most challenging I’ve done; with a sharp ascent to Lansdown ahead of the finish line.

In the same moment as I set off from the car park, I noticed my friends’ car pulling in – keep that in mind as we begin… 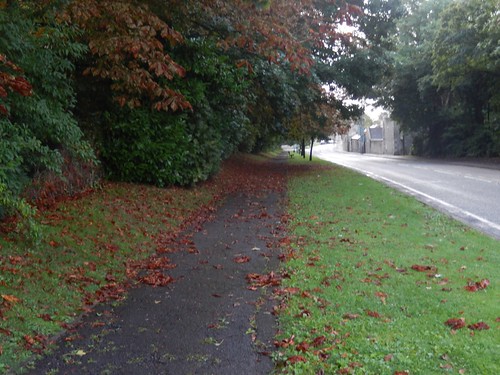 In a north-easterly direction, we pass the village of Weston, with the sun reaching through the clouds. I turned right up a road called The Weal, before making my first mistake of the day – not following a group of teenagers up Blind Hill (slightly ironic) and instead following the road around to another right-turn, which only led to a dead-end… 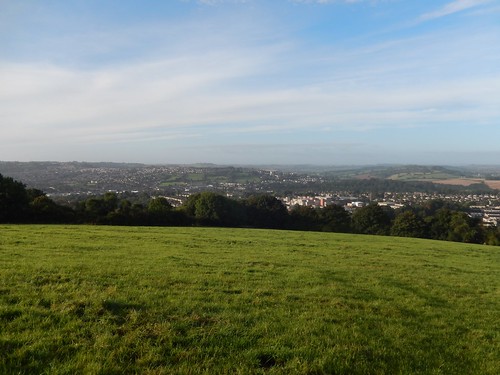 By the time I had corrected myself and read the guide properly, I was on the heels of my two friends; beginning an arduous ascent of Primrose Hill. 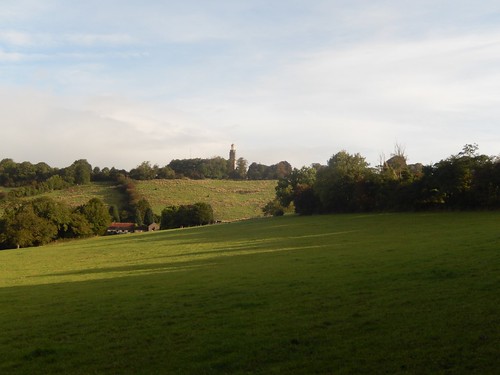 At the very top, we would reach a road that links the A420 with the A4 and Bath city centre; a short distance from Beckfords Tower (each year, I say I’m going to stop there… Still, I haven’t). 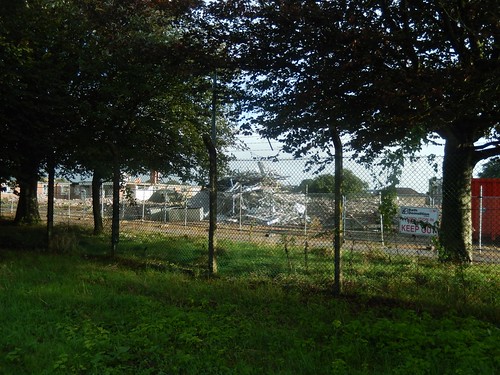 As per usual; the route turns left along this busy road, towards the tower and with land formerly owned by the Ministry of Defence on the right-hand side… With construction or demolition work underway beyond the wire fence, it was more of an eyesore than in previous years. 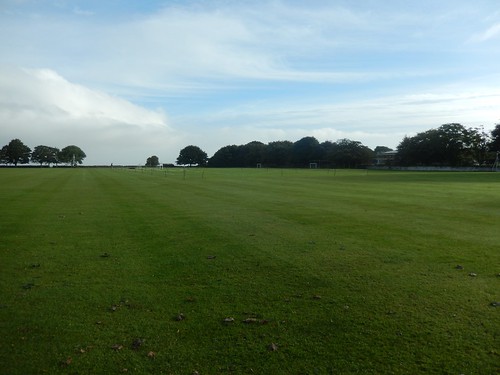 Slightly further along and across the road, we head in to the Kingswood School building for our first checkpoint. Tea was on offer here! I passed on the opportunity in hope that further cups would also be available ahead… Sadly, that wasn’t to be. 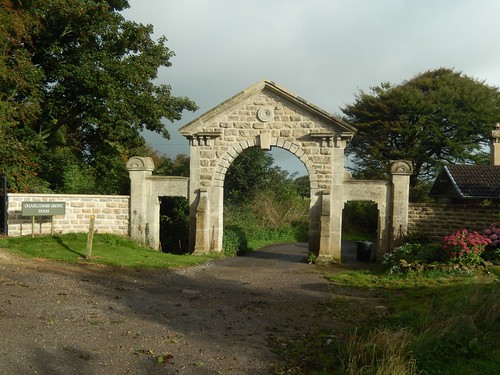 Moving on and across the sports field (where there is no public right of way at other times), the walk continues towards Charlcombe Grove Farm, where I was pursued (in a friendly way) by a young border terrier. 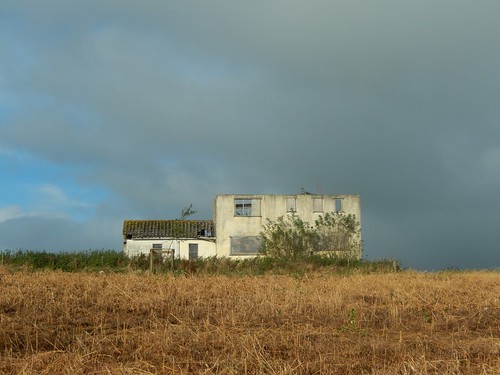 For the third year now, I’ve taken a photo of this isolated and seemingly derelict building up away from the farm entrance. One year, it may not be there… You never know! 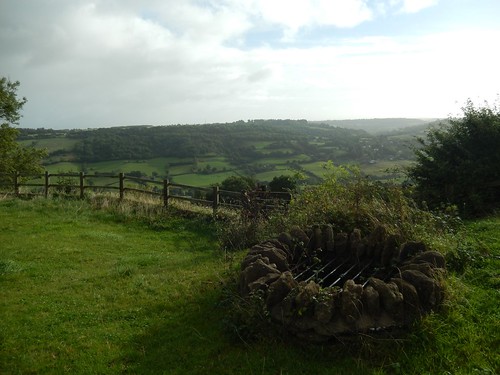 From Lansdown, I was now looking for a steep descent towards Woolley. 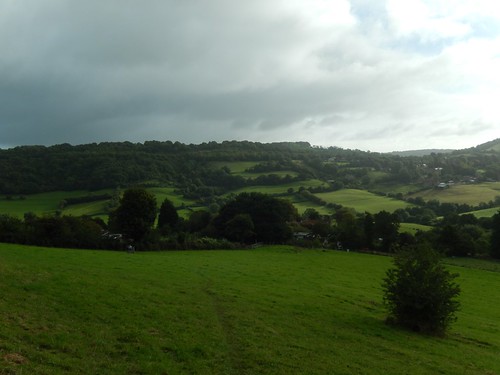 Far beneath the well, the path would turn wet with mud and incredibly slippery for anyone without a walking pole. I passed a small number of people headed in the opposite direction – assuming they’d started at Bathampton Mill, I think they’d done very well to have reached this point so soon. 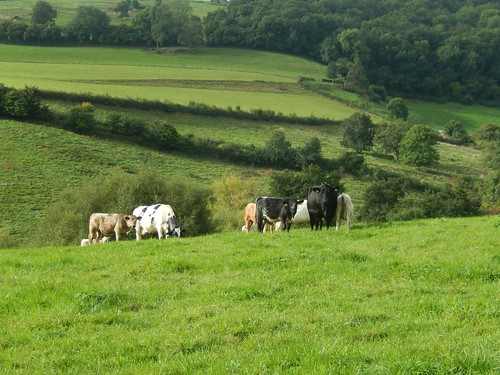 There were cows in one field, who gave me a look but nothing more. It was strange, walking alone but knowing I was part of a large group; invisible in that moment. 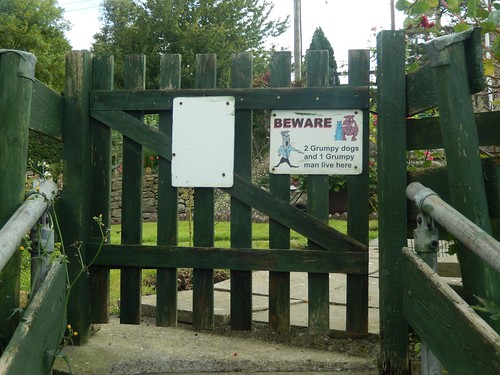 Heading towards Upper Swainswick and this gate brings a smile, every year. It genuinely cuts across someone’s patio/garden, passing right beside their back door! 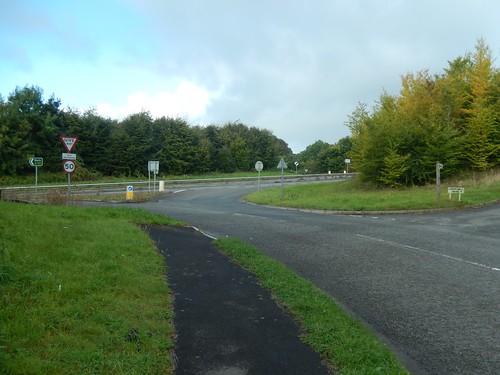 There’s a brief section ahead, where you have to cross over the unwelcome A46. But the instructions are clear and easy to follow. Soon, the mass of traffic, noise and grey is behind you. 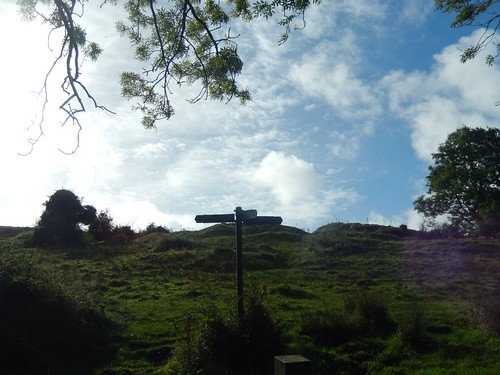 Beginning to climb now, with blue skies emerging over Batheaston, I found myself on the ascent of Little Solsbury Hill. 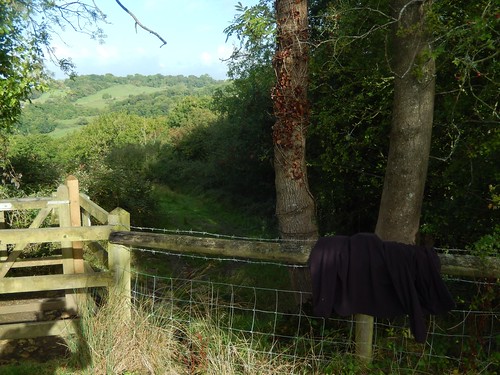 I think I’d begun the day, wearing a microfleece… I usually do. Someone else had felt the need to take a layer off and absently left it behind. 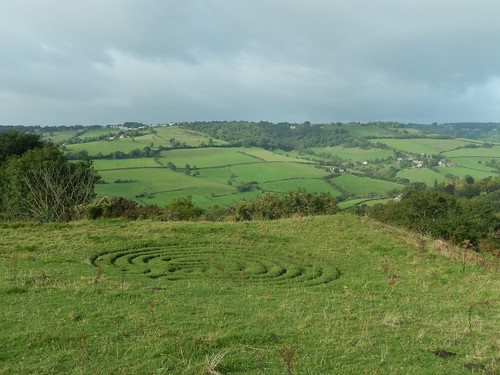 I don’t think I’d been to Little Solsbury Hill since my last Circuit of Bath in 2014. 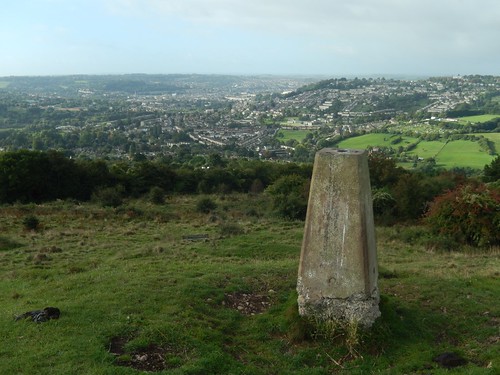 Standing beside the trig point, you gain a superb view over the entire city of Bath. 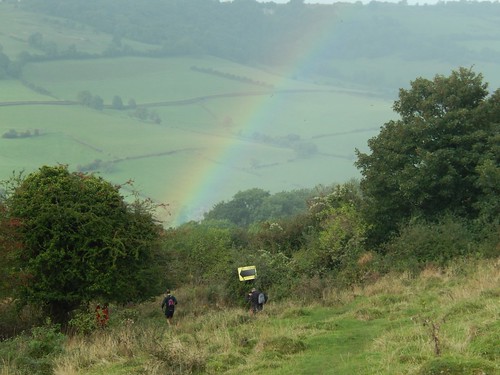 On a bench at the hillside beneath the trig pillar, I stopped for almost ten minutes and a brief refuelling. As I gathered my things, packed away and prepared to set off again, the heavens suddenly opened… Rainbows aren’t purely for us to admire. 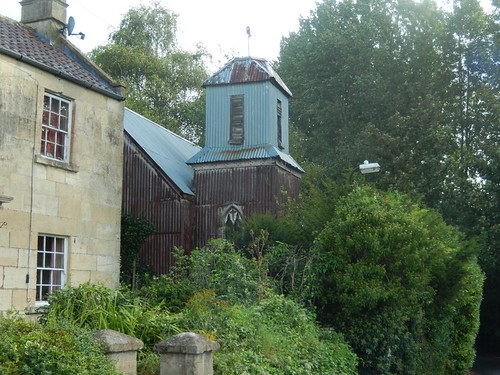 This shower soon passed, with the threat of an intermittent return. Heading downhill and now through Bailbrook, there’s a tin chapel to look out for on your left. 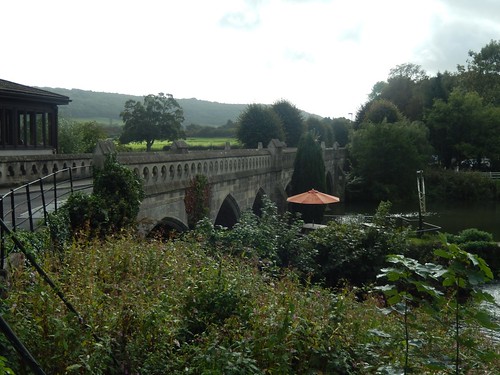 This section of the walk brings you to Bathampton Mill, from the roadside. Another checkpoint and possible start/end location. 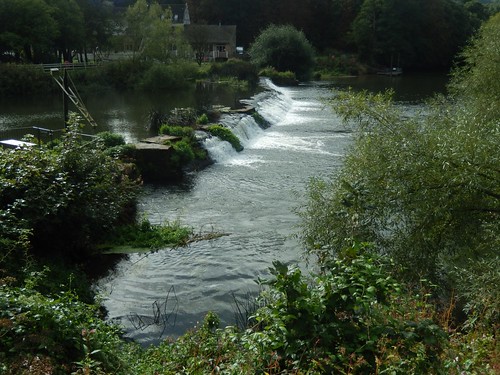 Returning to the road to continue with the walk, I couldn’t help but notice this banner in a field to my right: 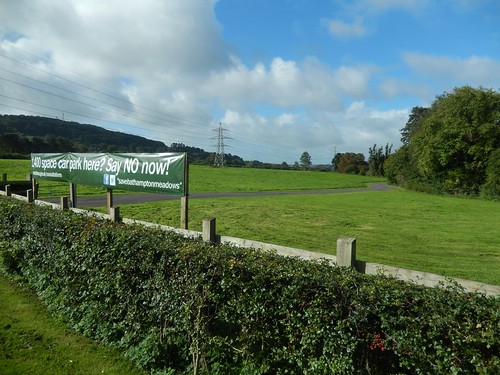 I’m not sure of the current status but plans have been in place to build a Park and Ride facility here (because Bath doesn’t already have three of those on its borders…). Not only is this a threat to green space but it is viewed as historic land; referenced in the Doomsday Book, along with Solsbury Hill.

Three P&R car parks in one twenty-mile circuit would be excessive, on a future charity event. 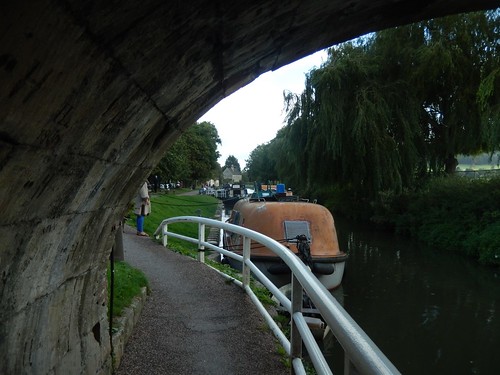 Then, there’s the section of this walk – any walk, in fact – that I do not enjoy… The towpath following the Kennet and Avon Canal! 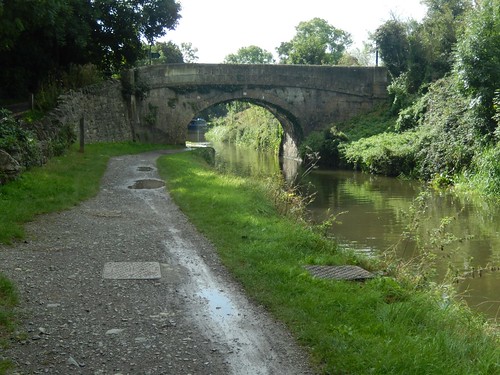 It’s flat, it’s straight, dry and tough on your feet… Worst of all; the occasional cyclist (of the frequent ones, on a Sunday afternoon) believes they have right of way and disregard the fact this is supposed to be a shared path.

One day, the Bath Chronicle may report on the cyclist who was shoved in to the canal by a participant in an annual fundraising event… 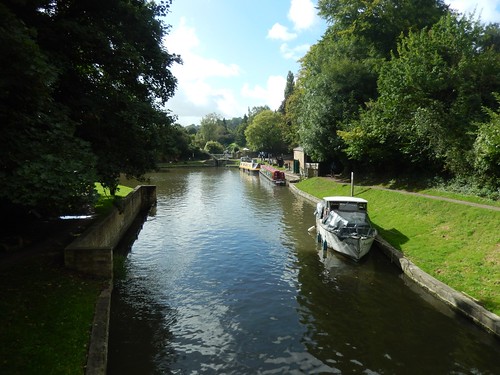 Before crossing Dundas Aquaduct, it feels like a very long mile or two that may never end. Overtaking the person infront is, suddenly very hard work. At least, these are my thoughts from walking alone. 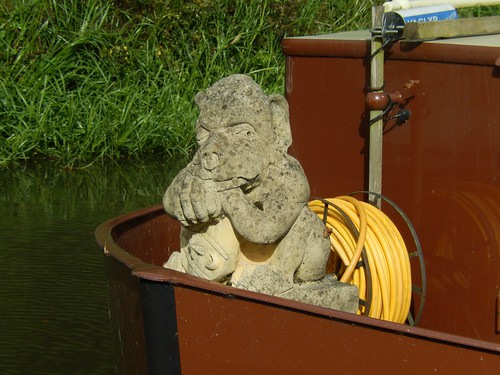 At around or just beyond the halfway point and beginning to think about stopping for lunch here; I’m going to call this an end to Part 1, with the conclusion to follow in my next post.