Having successfully navigated the 2 Rivers Way as far as Chew Valley Lake, I now had to navigate my way home and back to Wrington. 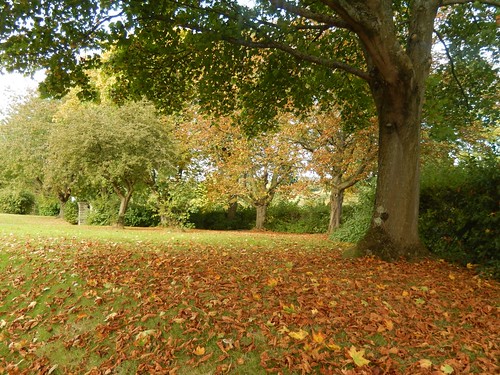 There was no other long-distance path that would lead me to the destination and, without wanting to retread those familiar steps but in reverse, I sought out paths that were both new and unexplored to me. 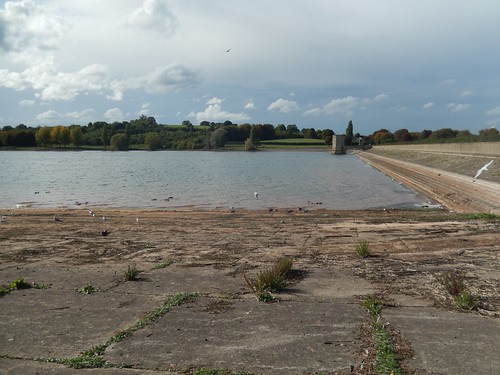 My lunch stop was spent at the north-east corner of Chew Valley Lake – a very popular area; close to the car park as well as the Salt and Malt café. 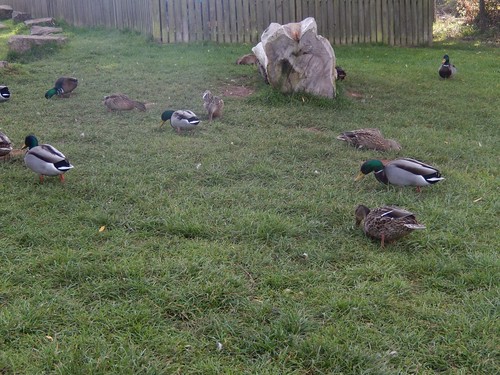 Ducks and birds alike could be seen, scouring the ground for discarded fragments of food. 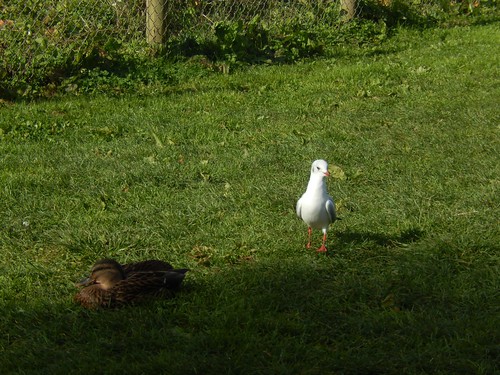 Some birds cried louder than others. But it was enough to drown out the sound of passing traffic. I was also grateful to have somewhere to sit down, with my leaky boots having left my feet within soggy socks. 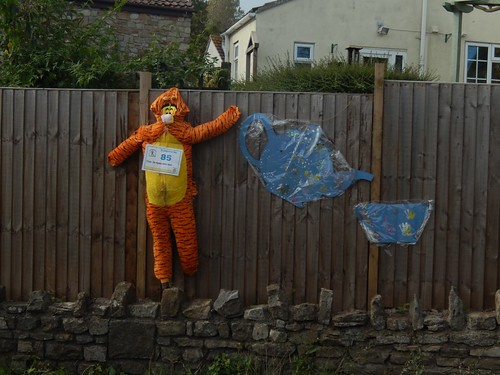 From the lake, I took a slightly different path back up hill towards Chew Stoke; first, crossing a previously-cropped field before climbing steeply beyond cattle to reach a woodland track near the school. It was close to the B3114 again that I then spotted my second scarecrow of the day (and yes, they misspelt Tigger). 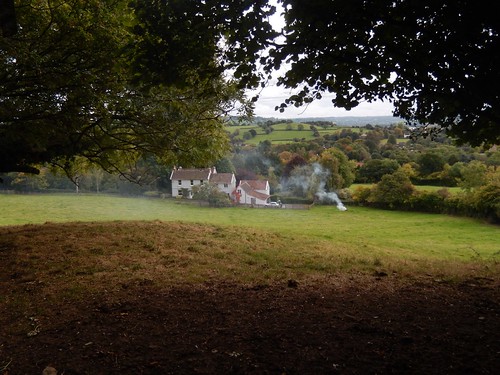 Soon, I began climbing the road up Pagans Hill – a quiet lane, running parallel to the road heading north to Winford. 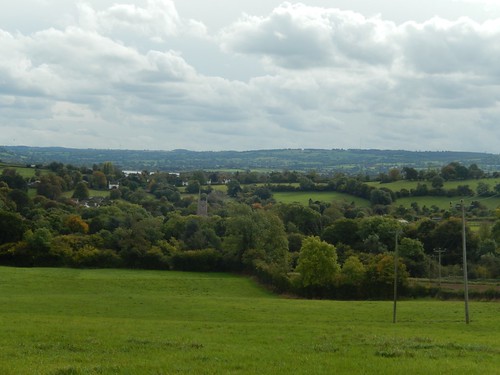 Up above a house called The Elms, I followed a level and elevated route, westward, in the direction of North Hill Farm.

As I reached the farm and passed through the kissing gate, I found the next waymark was leading me straight ahead… Staring at my map, I contested this and proceeded to walk between (modern) buildings and soon on to a noisy driveway, laid with deep chippings… 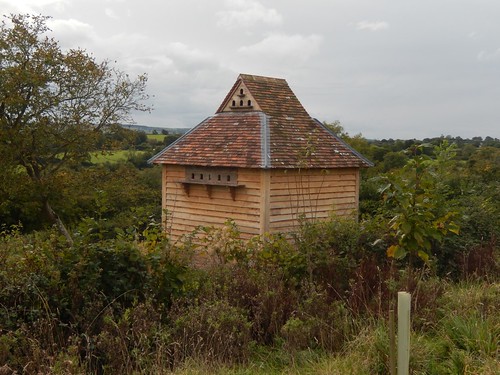 As I crunched across the property, I noticed three other people (a father and two teenagers) descending the hill towards me… After a moment, he asks:

It turns out that the public right of way did in fact run up, behind and along the northern edge of the buildings. I had accidentally committed the act of trespassing! Still, the landowner was very reasonable when I asked whether the footpath ran through here and, even before I apologised for my error, he was happy to point out the gate I was looking for. 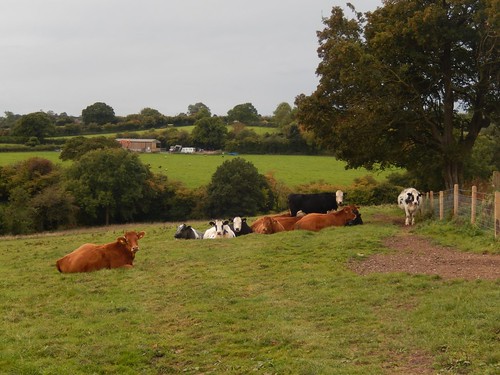 A similar confrontation with another landowner in a different part of the region could’ve led to an alternative story… I’m still awaiting my first confrontation with an ‘unwelcoming’ farmer who believes they have a right to deny and restrict public access without consulting any authorities. 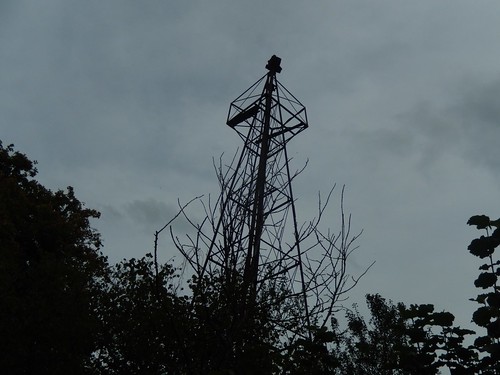 Standing beneath what used to be a windmill, I found myself on one of the quiet roads through Regil – I’ve known people confuse this place with Redhill, which is another village across the A38. That also leads me to an understanding of its pronunciation. 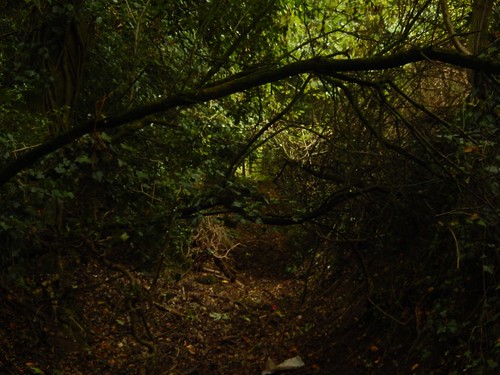 I followed the roads northwards, before turning west. This, to me, was more appealing than the prospect of walking between buildings of Regilbury Park Farm, to the south. Where one road took a sharp right turn, I looked to keep straight on, beneath falling trees and on an unmarked narrow woodland track, towards the vague image of a wooden kissing gate. From here, onwards to the next road, the route was surprisingly waymarked. 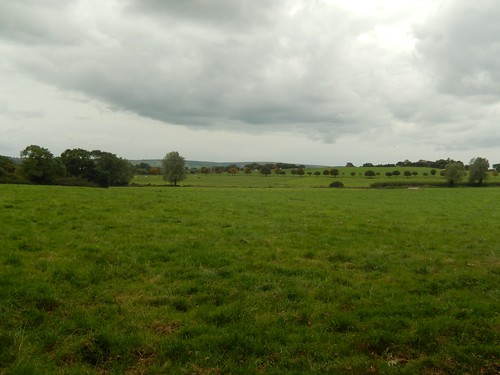 From Benches Lane, I look to cross straight over the road and through a boundary towards Regilbury Court… But, there was no path. No waymarking, fingerposts or even a gap in the hedge. Walking further to my left, I was beginning to follow the (surprisingly pleasant) driveway in to Regilbury Park Farm (they appear to rent out holiday cottages). 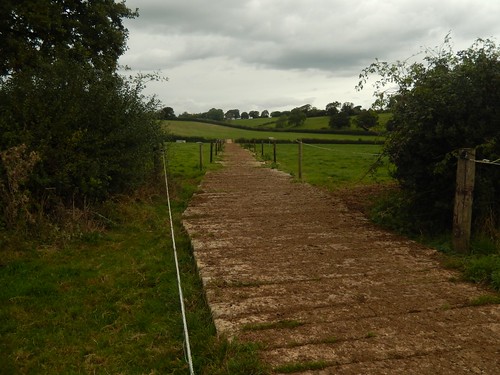 Anyway, I followed the concrete driveway (not marked as a right of way) in towards Regilbury Court [not the farm…] and met with a series of waymarking before my path ended. From here, I could continue along my intended route.

This path was supposed to cross the first portion of the field diagonally but, with lots of small green things growing and soft mud, I hugged the hedge line before discovering this driveway made of concrete sleepers. It would go on for some distance and, while it’s probably not for public use, I left no trace and reattached every line of fencing. 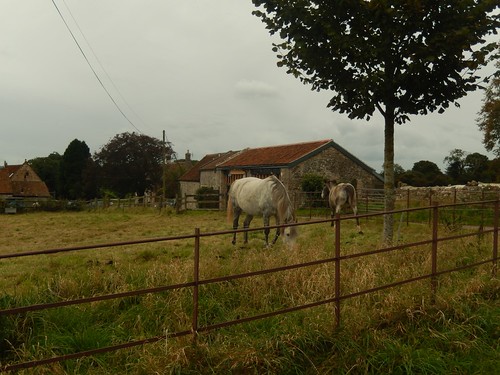 Regilbury Court isn’t much to look at from the outside. On a dry Saturday afternoon, it was very quiet as well… Google suggests it’s modern day usage is for horse training. I’d expected this place to be used for corporate and wedding events, much like nearby Aldwick Court. 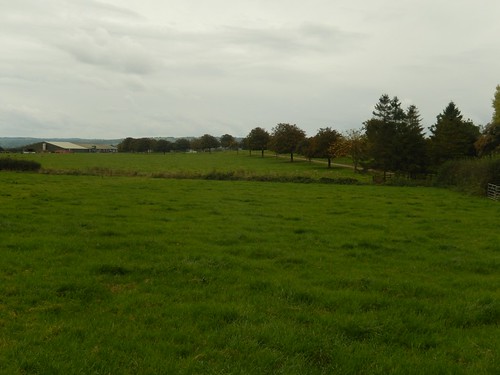 That’s the tree-lined driveway leading down to Regilbury Park Farm (confusing, I know).

Along the next road, I walked north to a crossroads; somewhere north of Butcombe but within the parish of Nempnett Thrubwell. That’s where I found the village notice board… 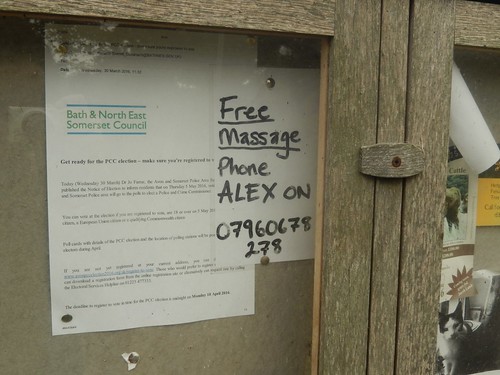 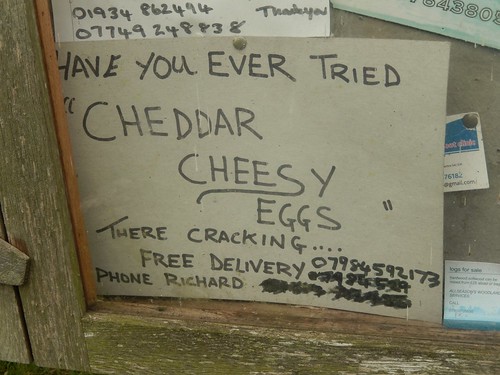 Leaving my phone (and marker pen) securely zipped away in my backpack, I continued further north; sticking to the road in favour of two cow-filled fields and soon walking past the driveway to Butcombe Court. 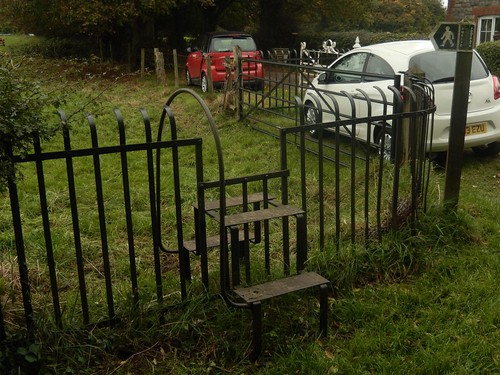 First, there was this ladder stile. Although not wooden, it may be the finest example that I have yet come across. 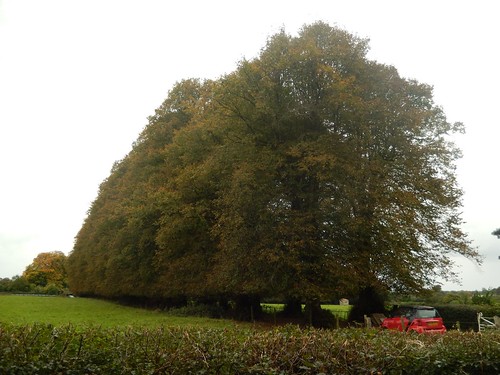 A line of great trees borders the driveway down to the main buildings. 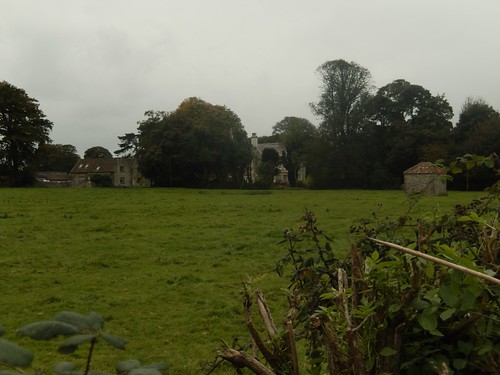 There wasn’t an awful lot of Butcombe Court that I could see clearly, beyond the shepherd’s hut and from the roadside, leaning over a hedge. Apparently, it was used as a safe extension of Clifton College school in Bristol, during World War II.

With cars running more frequently in both directions, I knew I was only minutes away from the A38. I could hear the 50mph traffic. Before moving on, I had to make sure I was waterproof as the clouds had begun to drain.

Going back over thirteen-years ago, I used to occasionally walk my dog along this road, on the way up from Felton Common, before travelling north up the A38 towards home. Once, we walked much further down these lanes (I remember the first time I saw the name, Nempnett Ubley) and, without any form of guidance, made own way steeply downhill and through a village that might’ve been Butcombe… Before eventually reaching the A38. 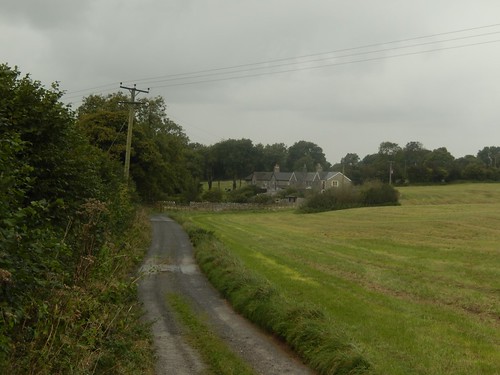 Before crossing over; there’s a pub along New Road called The Bungalow Inn. Recently, I became aware of plans to knock this down and build a hotel for the ever-expanding Bristol airport… I know some of the reviews aren’t great, but still!

Yesterday evening, I read of how the Lord Nelson in Cleeve has suddenly been sold and is possibly going to be replaced by a popular ‘pub chain’… Either that or, the only pub in the village will be knocked down and replaced with (most likely, unaffordable) housing. 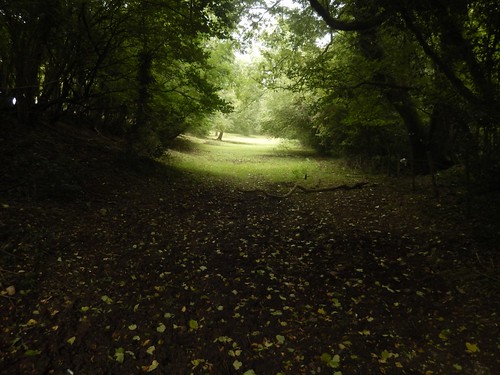 With an end to my walk almost in sight, I followed a wide woodland path past Hailstone Cottages and then along another Goblin Combe that I was not aware of – this is not to be mistaken for the Goblin Combe, which is not far away but closer to the A370. 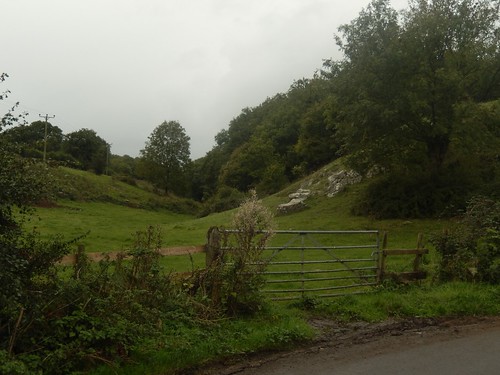 I could see from the map in front of me that, but for the road ahead, this route was destined for Broadfield Farm – an area I try hard to avoid for the deep red mud that adorns is unmarked footpaths throughout the year. 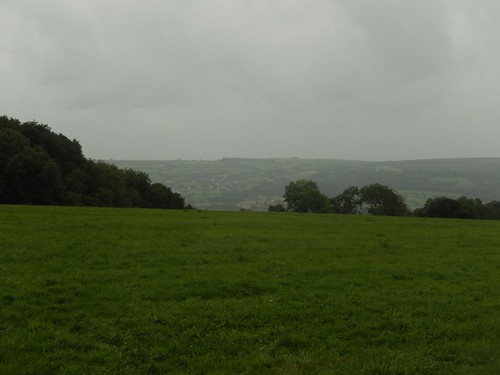 Climbing Winters Lane – many years ago, I would cycle along here as part of an elongated loop around Bristol Airport – I soon made a right-turn towards Cottage Farm, where I would reconnect with familiar routes from my summer of evening walks; gradually descending towards Wrington. 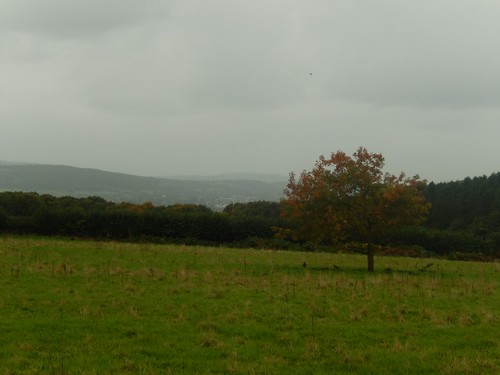 You can achieve great views over the Wrington Vale and towards the Mendip Hills, from here. I walked a little further west towards Barley’s Farm, before turning south. This also evades the road walking of Long Lane. 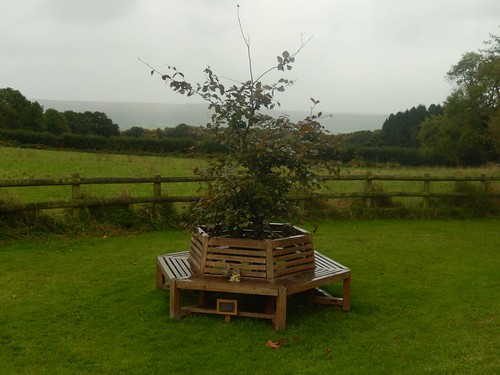 I frequently pass this tree-seat near Meeting House Farm. It sits beside a T-junction in footpaths but I’m not sure whether it’s available for public use. 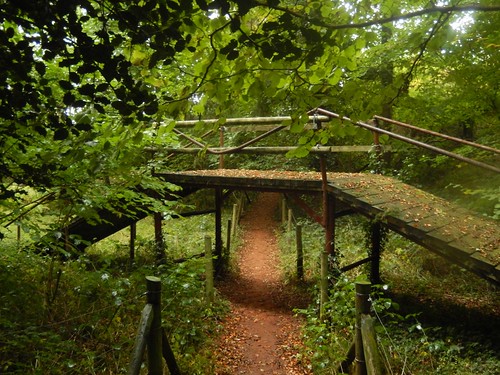 These woods, near Water Catches, are a great place to spot bluebells in the spring. Although, there is only one right of way and the bridge remains private (probably for shooting). 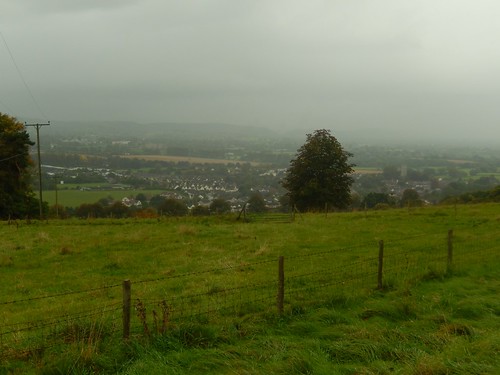 Although it’s damp and dreary, this remains perhaps my favourite view, overlooking Wrington. On a clear and dry day, you can see the top of Black Down and  various heights of the Mendips.

I felt pleased that I had finally filled in this gap in my completion of the 2 Rivers Way, for having been able to leave my car and, although my feet were wet and tired, it had been a good adventure. Somehow, I’d managed to amass 17.5 miles across the full circuit – meaning, that this return route was more than double the length of the outgoing! 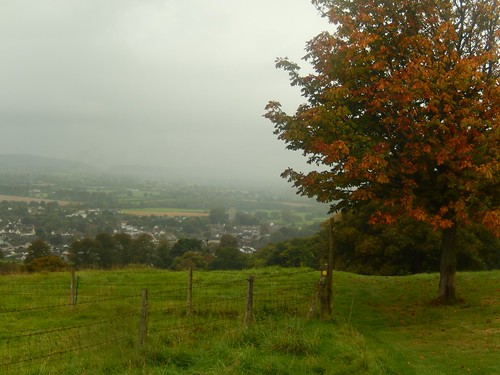 Distance of this walk: 9.5 miles