This walk was originally scheduled to take place seven-days earlier. 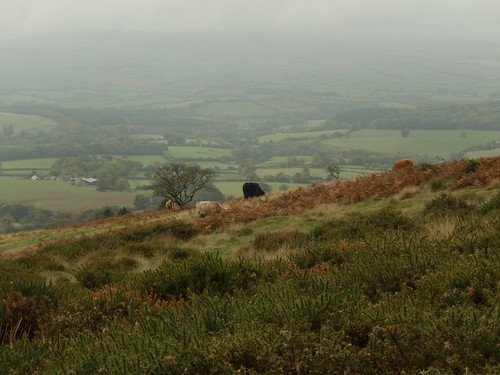 But, the symptoms of a bad cold began to develop within me between Wednesday and Thursday, leaving me feel quite weak, occasionally dizzy and physically less capable of leading a group up and over the Quantock Hills.

I’d remained optimistic throughout the Friday that I might be ‘well enough’ by the next morning. If not one-hunded per cent, I’d be capable of leading the walk. That wasn’t to be and I ended up cancelling the walk a couple of hours before it was due to start… Not the most ideal of circumstances but I fulfilled my duties as a walk leader to be at the meeting point on time, just in case – and, as it happened, one unfortunate person was waiting for the walk to start, while everyone else had seen my message on Facebook.

Even in Bristol, it was a very foggy day of low visibility which might’ve led to some disappointment on the walk. Conditions were somewhat improved, seven-days later. But, as you’ll see from my photos here; well, you won’t see an awful lot beyond a couple of hundred metres! 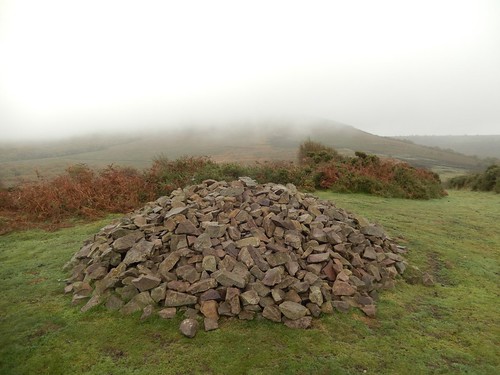 If there was a blessing to be found in all this mist, it was the inability to see Hinkley (No) Point from the cairn on Woodlands Hill. From the further summit of Dowsborough, the further hillfort, the visibility beneath us was further reduced. 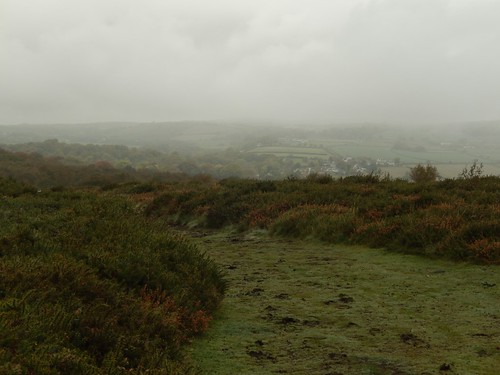 I remained gutted that I’d had to cancel the walk a week earlier. By that time, four new members had texted me to enquire about joining (only one of whom was able to follow my rescheduled walk). Not wanting to deter them from their first group walk, I encouraged them all to attend a shorter walk that was organised for the same day. Apparently, a number of other people ‘forced’ to attend that one were originally keen on doing mine. 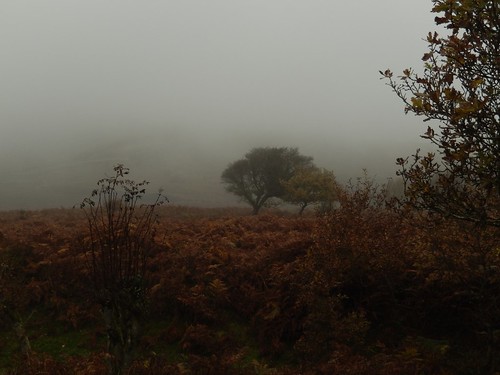 We descended from the hills, down to Dead Woman’s Ditch, where the few who had been able to join me enjoyed reading about the history of the area and the associated with John Walford and his Gibbet. 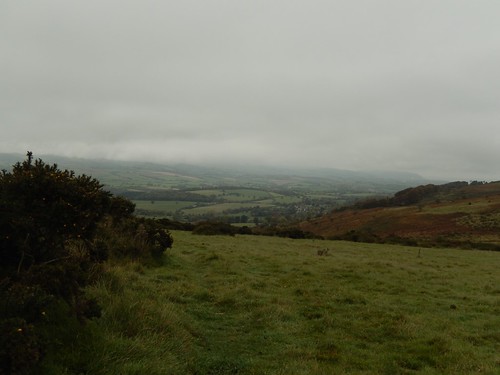 There was then an official toilet stop close to Great Wood, before the long climb up to Triscombe Stone. Another blessing was that it wasn’t a particularly busy day on the Quantocks and we’d not had to give way to any hoard of mountain bikers. 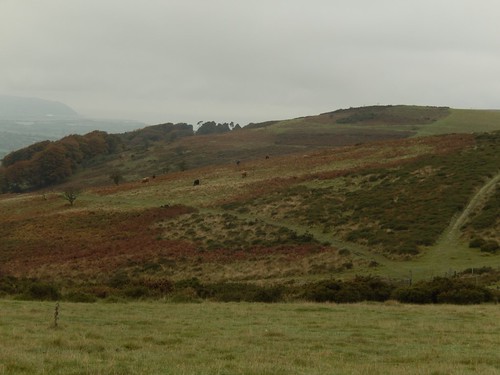 I was in two minds about continuing to the exposed summit of Great Hill, with such colourless surroundings. But, the others in my party were up for it and we probably spent a good twenty-minutes eating lunch before anyone began to feel too cold. 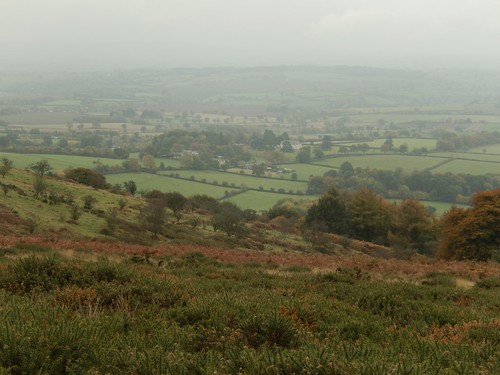 Those Highland cows were clear of our route, this time. It was only a shame we couldn’t see much of either the Brendon Hills or Exmoor. 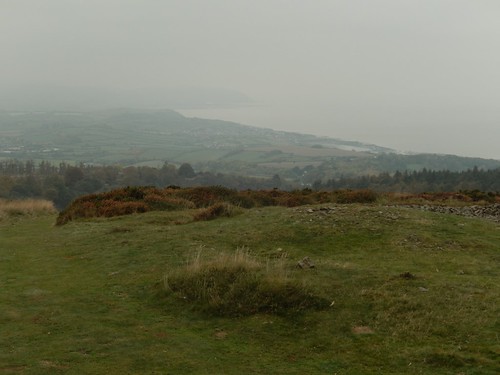 By the time we reached the top of Beacon Hill, things had not really cleared and you could not make out North Hill or the bright white blob of Butlins at Minehead. 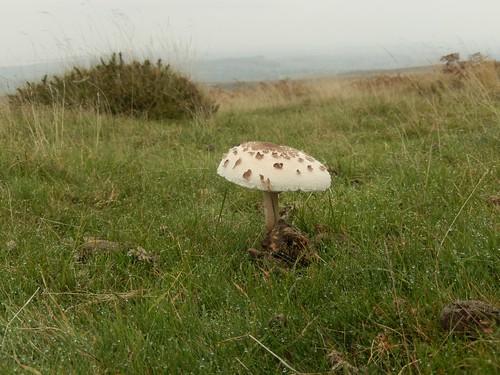 Small mushrooms were present in an abundance up here, having not seen any throughout the previous duration of the walk. 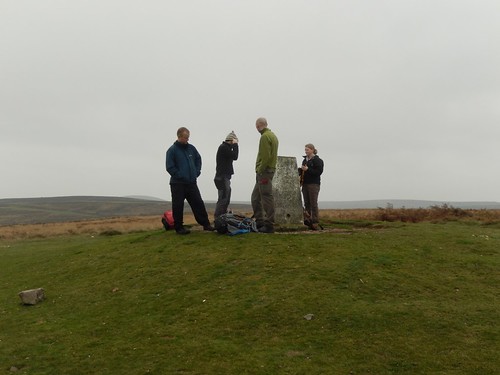 It was a smaller group than I would have hoped for but we got along well were able to maintain a good pace. It’s not a number I’m unfamiliar with on a walk that offers challenge, considering that I’m also known to walk at a faster pace than most.

On the final descent to the cars, we took the Great Road (Track) eastwards, passing a group of school kids before descending further between Pardlestone Hill and New Ground, beside Alfoxton Park to arrive back in Holford via the Coleridge Way. We also passed the historic dog pound that I don’t seem to have a photo of. 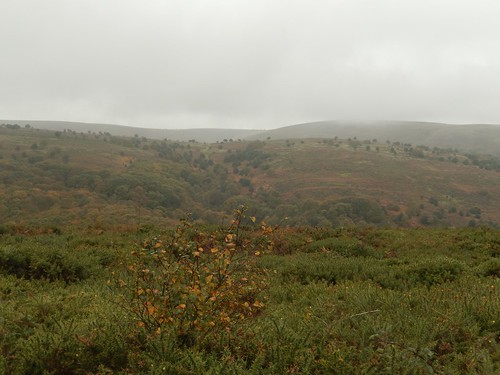 So, that was my fifth walk and the corresponding £20 Cotswold Outdoor voucher should be on the way to me soon! No doubt, I’ll be doing the same in 2017. This year, it wasn’t as much about the ‘incentive’ as it was about keeping walks on the programme, as we’ve suffered a couple of quiet months in 2016… Partly due to the fact that several former walk leaders have now ‘migrated’ from our 20s and 30s group in to the realms of 40+.

Distance of this walk: 12 miles