Over Christmas, I started a DIY job that I didn’t ‘have’ – and, at the time of writing this, it’s not entirely finished off and tidied up. 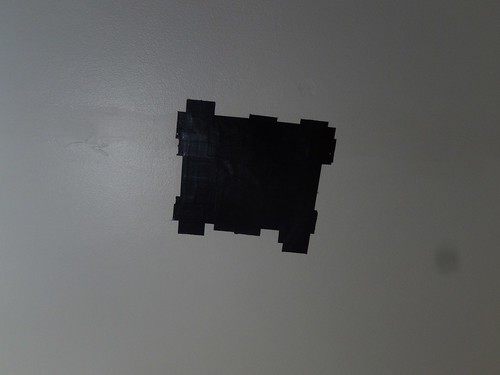 When I moved in to this flat in 2013, there was a very blatant hole (possibly as much as 5in in diameter) that would’ve once housed a light fitting of some sort.

What was there, why it was removed and when; I cannot answer. My kitchen area is quite devoid of half-decent illumination in places, along with the rest of the living room area.

At the top of the page, you can’t clearly see the hole because I’d quite recently covered it with duct tape… This was after the sudden disturbance of ‘rodents’ running up and down the ceiling. One evening, they were trying to dig or chew through my previous repair (which I’ll explain in a moment) and the addition of black tape was to help settle my mind.

I knew that it was time to do something about this. 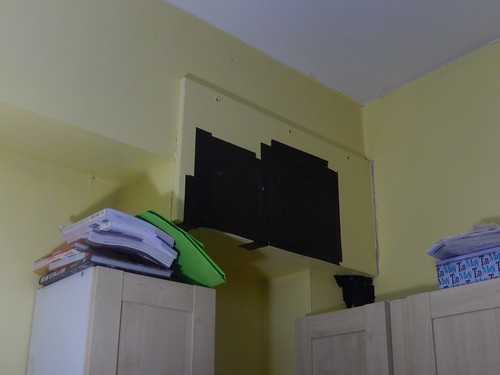 These large patches of tape conceal two square holes, which give access to the electrical switches and fuses. This struck me as the perfect location for any ‘rodent’ to enter my flat and so, I covered them up – with a long term view to making a fitting a pair of doors. 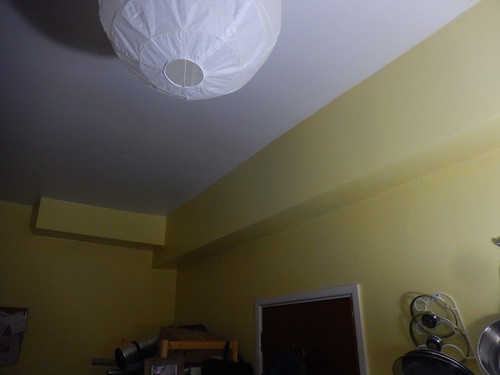 Although I’d still not seen any ‘rodent’ to be able to identify it, I had heard them climbing in and out of the boxed-in sections above my front door. I bought some pasta-flavoured bait (I think the brand was: ‘The Big Cheese’) and left one tray up there before adhering the tape… It wasn’t long before I could them literally taking the bait. 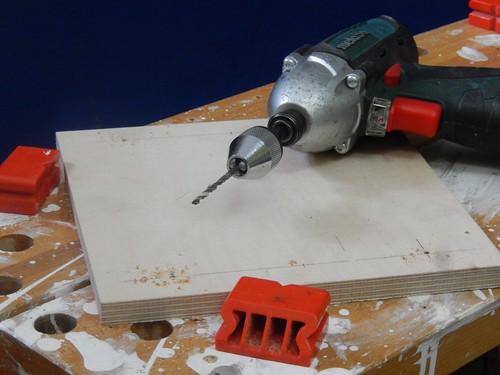 I started off with a square of 12mm thick plywood (this happens to be birch ply). This was something I could get my hands on easily – although, I’ve since been told that some builder’s merchants will let you have damaged or broken pieces of plasterboard (drywall) for very small change.

My previous ‘repair’ to this hole involved copious amounts of expanding foam and many dabs of Pollyfilla on top (underneath) of that. I still don’t know exactly how it defied gravity. 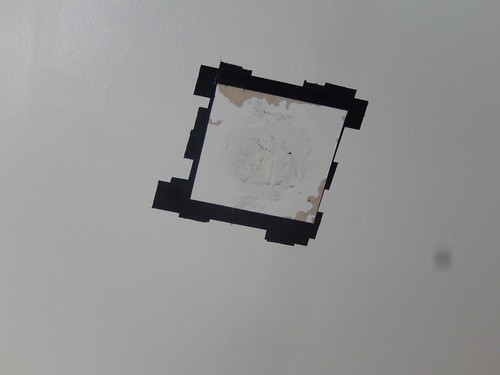 My plywood blank was 200mm x 200mm and you can probably just see that it was significantly larger than the original hole. I did this mainly so that I could create an ‘access point’. Naturally, I was going to add a tray of bait up there and check on it periodically until the disturbance had ended. 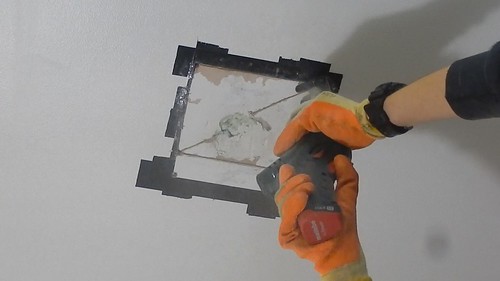 I temporarily screwed the blank on to the ceiling so that I could mark around it with a Stanley knife. Peeling away the excess tape from inside the square, I now had an easy outline to follow with my reciprocating saw – a power tool that isn’t strictly necessary but something I had purchased and wanted to try. 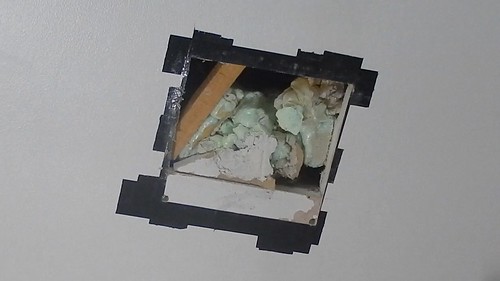 You can see the mess of expanding foam. I’ve no idea where or what the wood came from but it all went in the bin. I also had to reduce the width of my square by 40mm when I found there was a joist in the way.

Interestingly, the ceiling joists in this property span the longer length of the building, which is quite unusual by today’s standards. There are several large beams spanning the narrower width between walls and I think the joists are ‘hung’ from them, as opposed to being sat on top (I make this assumption, based on the ceiling height in relation to the underside of the beams). 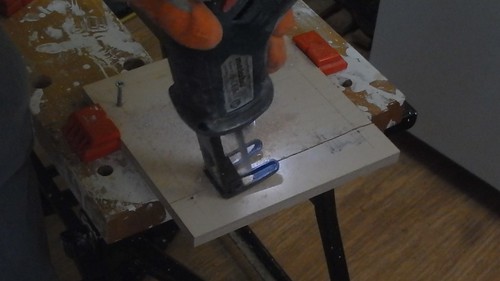 I again used my cordless reciprocating saw to trim the 40mm excess from the plywood. Using a jigsaw blade, my cut wasn’t perfect but I was able to fine tune the edge with a block plane. 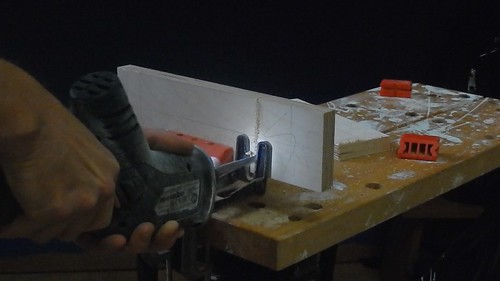 I bought this saw partly because it is compatible with the 10.8v batteries I have for my drill and impact drivers. Metabo, unlike Makita, don’t produce a cordless jigsaw in this size and so, I think this will become a useful tool to have for DIY tasks. 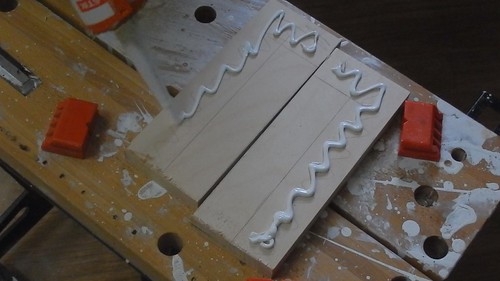 Two plywood cleats (approximately 60mm x 18mm) were fixed to the inside edges of the newly created hole. I chose use an adhesive (of the sticks-like-you-know-what variety) as well as screws but it may not be necessary. This setup still allows access to the space between my ceiling and the floor above, where you could otherwise enclose it with a larger section of board. 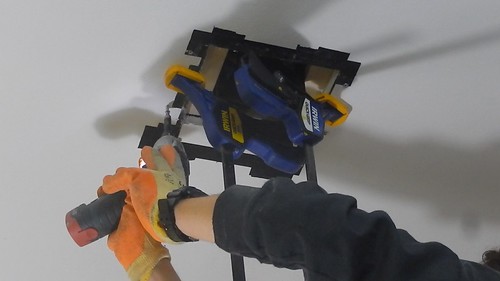 Each cleat overhangs the square opening by half its width, allowing for a screw fixing of the new ‘patch’. 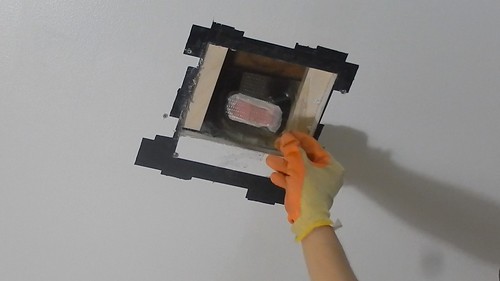 …Not forgetting the tasty bait, before sealing the hole again. 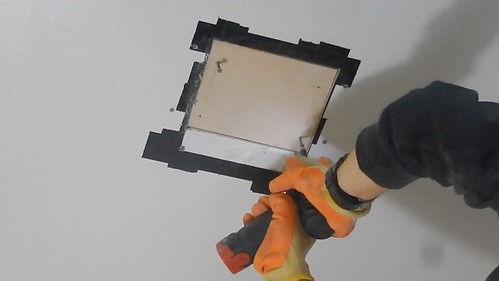 This is the kind of situation where having an impact driver is almost essential, in my opinion. You’re fighting gravity, in an example like this and yes, they’re noisy but almost effortless to use. Some people believe they’re ‘too powerful’ for certain jobs but I’ve used tiny screws with success and believe it’s down to taking control of your tool, how it works and not letting it control you.

I’m also the kind of person who gets p***ed off when I see or hear someone using an impact driver like a water pistol or something – pull the trigger slowly and HOLD IT, FFS! 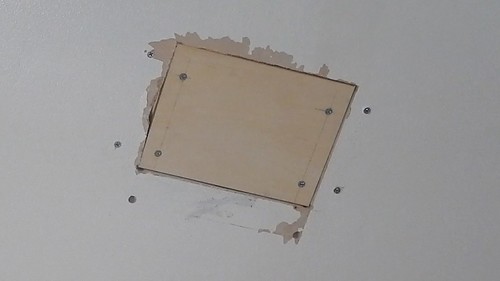 So, those screw still need to be filled [I need to buy some more filler], I should first countersink the ply for the heads and then, when it’s not too cold, I’ll look at painting over it all.

Things have been very quiet above me since doing this. But, in the interest of being extra careful and more secure; I tackled a couple of smaller jobs at the same time. 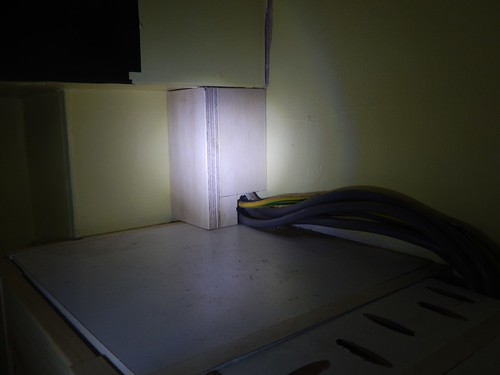 Since taking this photo, I’ve made greater progress to conceal the whole length but I made an effort to box-in the unsightly wiring that runs down, on to and, for a shortway, along the tops of my kitchen wall cabinets. These will be painted and sealed in place with silicone (no high-strength glue), just in case anyone decides to renovate the kitchen in future and might prefer not to lose a chunk of the wall in the process. 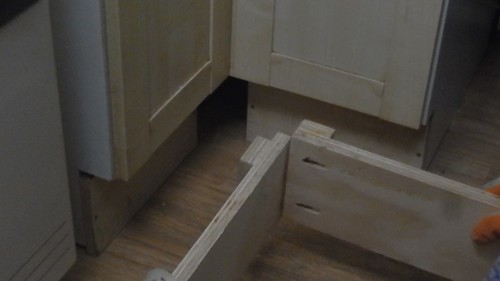 Down at floor level, I’ve always hated this unsightly (and unnecessary) gap between plinths. So, I knocked up a plywood solution that locks together with cleats at the mating ends. 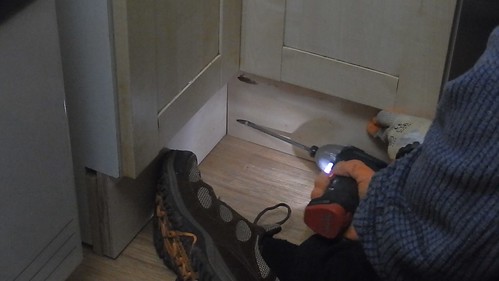 This does not affect the original plinths in any way (no screw or pilot holes), as the two pieces of ply are pocket-screwed together. This cannot be pulled out; you would have to remove both screws, first. Not only is it functional but I quite like this, as it hides the ugly screw heads used to crudely fix the plinths in position.

If I ever come across any ‘recyclable’ plinth material, I may replace the lot… Just for the fun of doing something practical. I’d even buy the correct brackets for it. 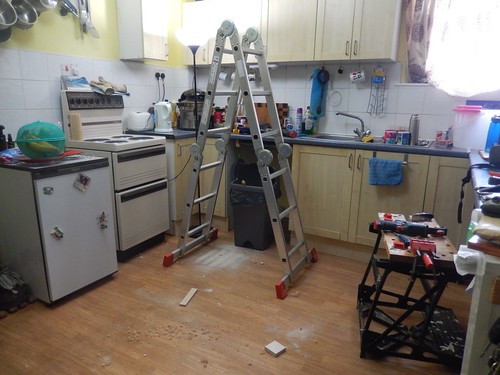 So, a couple of hours working in the kitchen and the place was in slightly more of a mess than usual. I always find it difficult to work in a living space and try to live in a space that’s currently being worked upon. This is part of the reason I don’t immediately finish jobs like this.

With all of this, I created a video that was promptly uploaded to YouTube (at a time where I have reached 4,700 subscribers). Very soon after this, some developments emerged…

I woke up one morning to find my roll of baking paper lying on the kitchen floor. I currently keep this (with my tin foil and cling film) on top of my kitchen cabinets, close to the electrical wires that I’d started to box in…

I had my suspicions but it wasn’t until I saw the state of this discarded tea bag that my alarm bells began to ring – I’d finally been invaded! I’ve since stopped leaving tea bags ‘to dry’ like this and now chuck them straight in the food bin, leaving a brief trail of drips.

Moving for my sponge, I noticed it had also been attacked. These bits were so tiny, I was confident it could only have been a mouse. Also, I seemed to know from where it was entering my flat.

Later that afternoon (after having been out for a walk or something), I was sat on my settee and hear the occasional noise up near the electrical box. I looked up; nothing. More noise. I turned around and; nothing. Again, I heard that distant sound – only to look across the breakfast bar behind me and see something small whizz away from my line of sight, knocking items to the floor in the process!

So, I bought myself a trap, costing less than £4. Designed to capture and not kill.

On the first night, I lined one end with peanut butter, only to awaken the next morning and find the peanut butter had disappeared while the trap remained in tact.

I repeated this and left it for the day as I went out, even coating it over the lever that triggers the door from inside… By the time I returned, the bait had gone and the door was only half-closed.

Attempt No.3 proved to be far more successful: 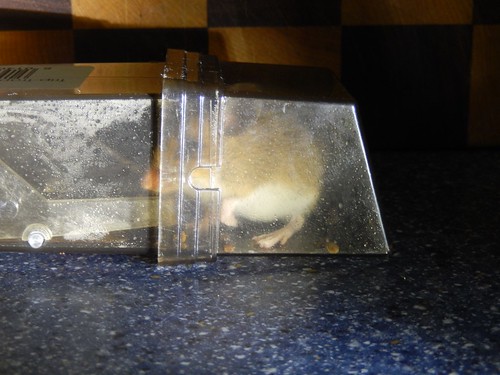 Before going to bed around 23.00, I left a few crumbs of chocolate cookie (chocolate orange cookie) inside with fresh peanut butter. I awoke around 00.50, feeling wide awake but disturbed by the sounds of something tapping on plastic… Every few seconds, I would hear it cease and assumed the mouse had escaped. I wanted to stay in my warm bed but the mouse clearly wasn’t going to settle down and neither was I, being a very light sleeper who is frequently awoken by my own bodily sounds.

A tiny field mouse. I felt quite sorry for him or her and briefly entertained the idea of keeping it as a pet (not that I had anywhere suitable). It was past 1am by the time I had my boots and head torch on. Ten minutes up the road and I released the little guy out in to a field on a freezing cold night.

Since last Wednesday morning, quietness has resumed and I’ve yet to see or hear signs of any other mouse. It has opened the bag of bait I’d previously left and upended it from the tray but I guess it either didn’t like the flavour, could smell something better in my kitchen or maybe the stuff I bought was in rat-sized portions.

I’ve kept the trap reset and with fresh bait, just in case anything else should emerge. Another DIY job will be to further restrict access for them. But I’m still concerned that those initial rodents I heard might have been rats after all… I mean, I could hear every footstep across the ceiling, where the mouse was able to enter my home in near-perfect silence.

So, I have some other small jobs to do and I’ll keep you updated. For anyone hoping to find a more conventional plasterboard (drywall) repair, I’d like to refer you to John Heisz’s recent video. I do like his ‘no sanding’ approach.