In Part 1, I had reached the summit of Hay Bluff, with its trig point imprinted with the image of the Welsh Dragon. 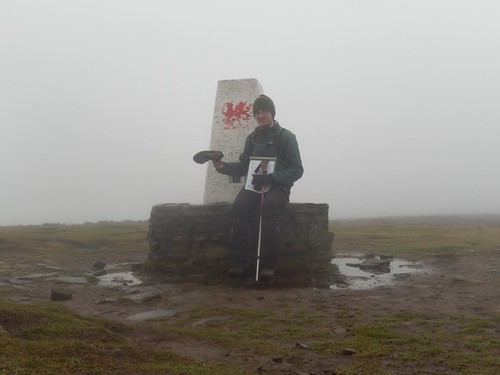 It was slightly too soon for me to stop for lunch and I was looking to rejoin the Offa’s Dyke Path heading south, before a descending to cross the Olchon Valley.

For the most part, this remains to be a walk that you can follow from the original Walk West eBook. I’ve added a few extra miles with a couple of optional trig point stops but these Black Mountains are a great place to be, whatever distance you’re prepared to trek. A very similar walk to Geoff’s is also available, thanks to the AA:

Cats and Dogs on the Black Hill

I failed to mention this in my first post but ‘The Cat’s Back’ is another name for the ridge that forms Black Hill, where I began this walk. This next ridge, east of Llanthony Priory, is also referred to as ‘The Dog’s Back’, if I’m not mistaken. 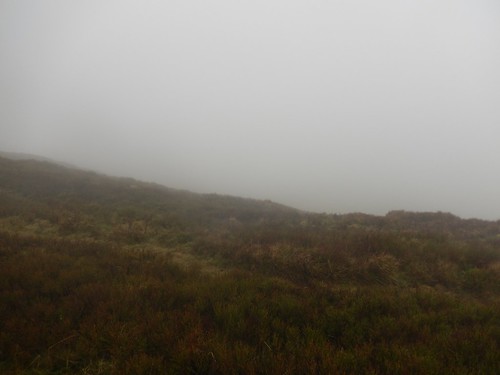 Where I could’ve easily turned back on myself and retraced steps to that stone marker on the ground, I decided to head east in the aim of rejoining Offa’s Dyke further north. Studying my map, I put my trust in my own ability to follow cliff edge… Whatever was down below, I couldn’t see for the persistent cloud. 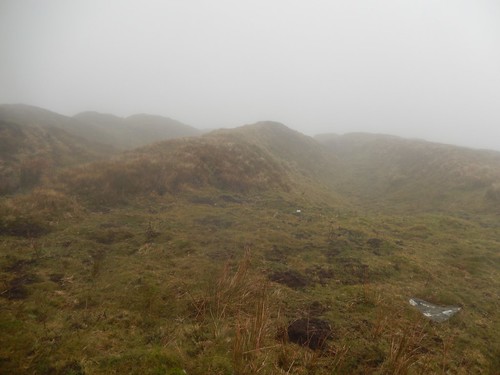 I kept myself to the ‘right’ (south) of the very tight contours and following a compass bearing of ‘east-ish’. But I could’ve paid more attention to the rise of land to my right. ‘Which one of these is Offa’s Dyke?’, I wondered… 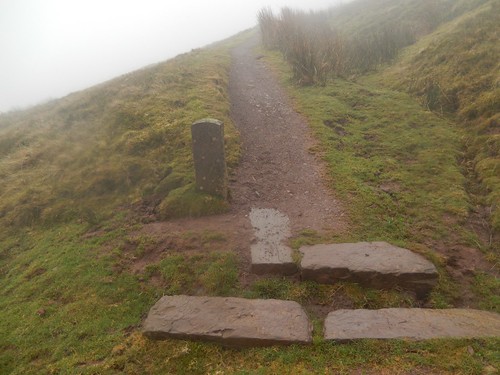 I would end up descending a vague path towards the cliff edge once more. I then realised I was further along that I realised (low cloud can be disorientating, I guess) and found another marker for the National Trail. 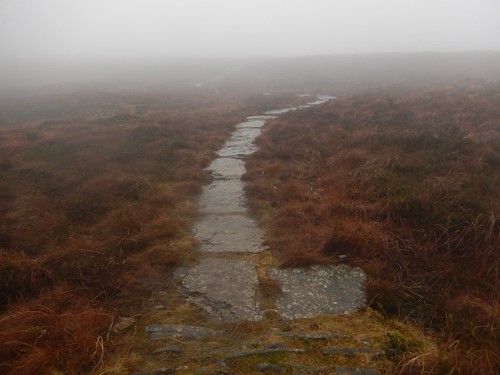 This led me up and around to the south; to soon follow another limestone walkway across the bog. 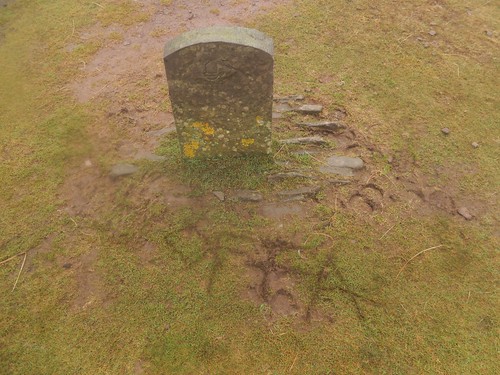 I was enjoying this whole adventure, even where the cloud showed no sign of rising. Returning to that first marker, I – rightly or wrongly – scribed the name ‘Offa’ in to the ground… I felt it was more appropriate than my own name! I also hoped it might help another soul who might arrive uncertain of their location… On top of that, I wanted to leave my own mark, having seen just one other body brave enough to bare these conditions on an otherwise sound day for a hike.

I’m sure some will disapprove. But I expect the elements of nature will wash it away before too long. 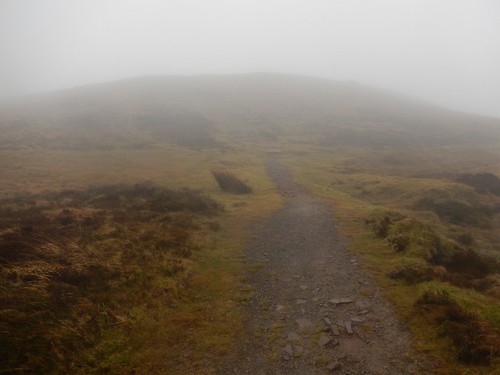 As predicted, there was no question of the way forward along the clear path of Offa’s Dyke. 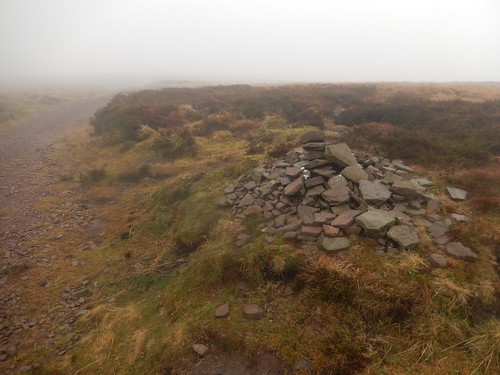 Over the hill and along a greater stretch of limestone walkway, I would eventually pass another walker. This guy had two walking poles and a reasonably-sized backpack – a proper walker! Not just a local exercising their dog. 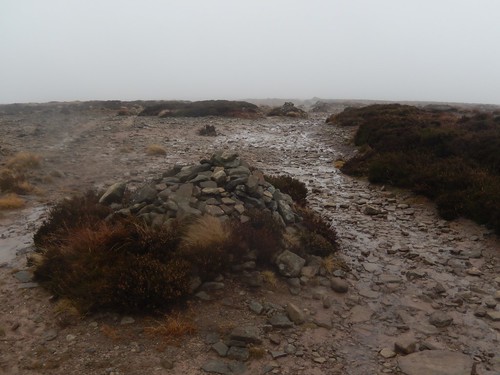 Beyond the bog and on to open moorland, the path grew wide and almost trailed off in several places. I remained true to my compass and had read that the route is set out with a series of stone piles through here (I’m not sure if or how many of them may actually be cairns). 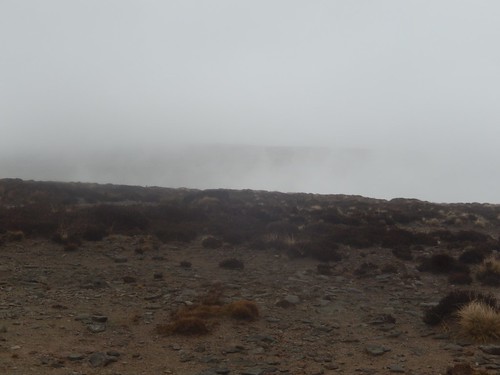 Nearing another slab of stone on the ground that would indicate the beginning of my eventual descent down in to the valley; I looked across towards The Cat’s Back… Perhaps the rear of the cat’s neck, was almost visible through the cloud. I thought of those spectacular ‘anomalies’, where people looking up at the sky believe they can see entire cities just beyond the cloud. 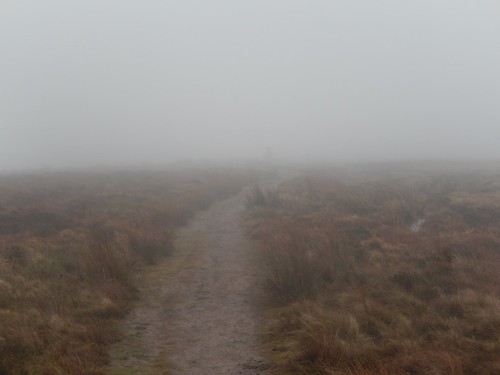 There was still one more trig pillar I had hoped to find before making the final descent. It was on the Offa’s Dyke path, maybe one-mile further south. It was easy enough to reach; I only felt like it took much longer. 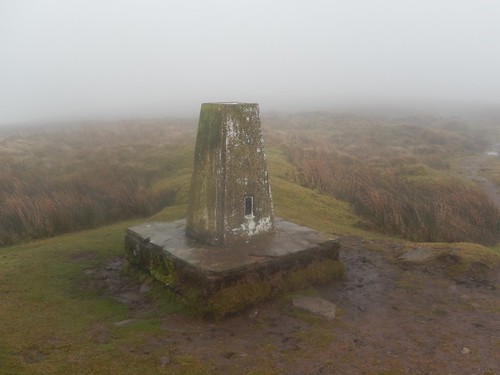 It was here that I would set up my WalkStool and stop for lunch. 610m above sea level. Less than three-miles further south along this path, there exists yet another trig point – one I’ll look to bag on my next visit. 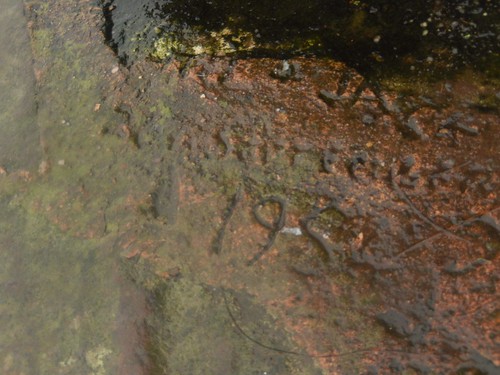 There was something inscribed on to the base of this trig… The year it was installed? I couldn’t make it out but often wish these staples of our history bore greater on-site information. I honestly believe we should treasure them something like our many stately homes and castle ruins.

I’d stopped for a good twenty-minutes and, sitting along the route of a well-known National Trail, I half-expected my third passer-by to appear at any moment… But, they never came or went. Solitude. 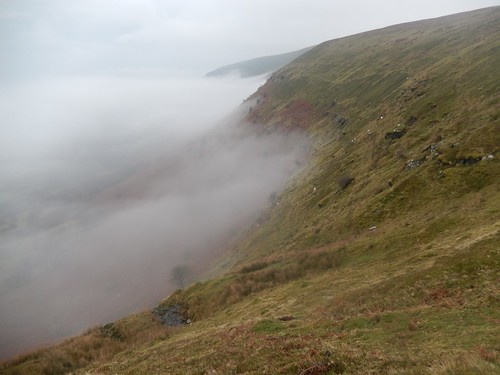 Retracting my steps to the ‘Pile of Stones’ above Olchon Court, I began my descent. 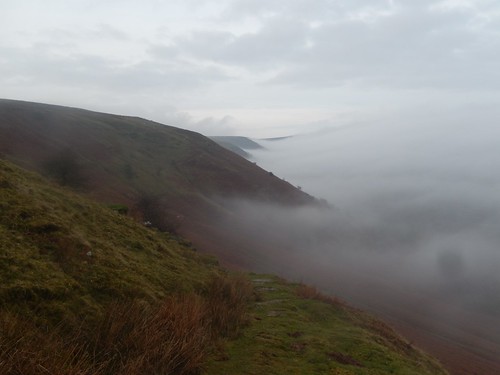 It wasn’t easy and I’ve made a decision to add a second walking pole to my array of kit very soon. I felt like I was descending not only the hillside but making my way down through the cloud. 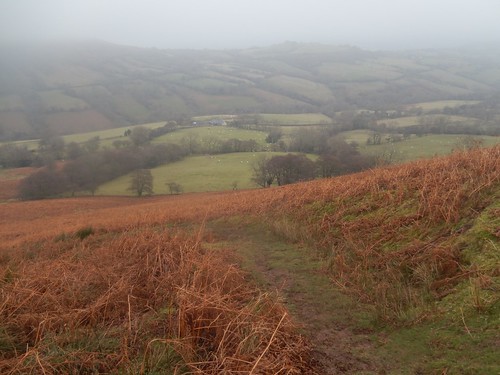 Gradually, the Olchon Valley awoke in front of me. As much as I had longed for the mountainous landscapes in the run up to this walk, it was a beautiful sight of its own. 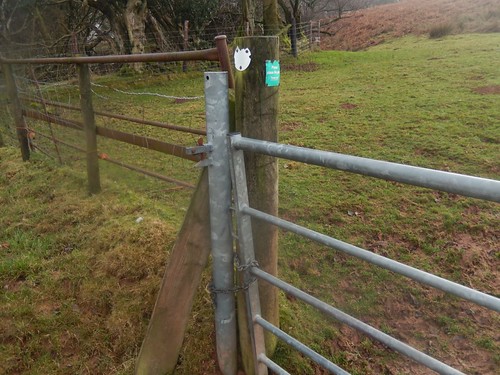 At a junction, I followed Geoff’s words to veer left and away from Olchon Court. Before reaching the quite road, I had to scramble over a chained gate… I’ve yet to report this – partly because I’m not sure whether this land is in Herefordshire or part of South Wales.

I’d intended to save the rest of Geoff’s cross-valley route (which is identical to the AA’s) for a return visit and instead, I turned left up the road, keeping my eyes open for a right-turn and footpath crossing a series of fields and Olchon Brook… 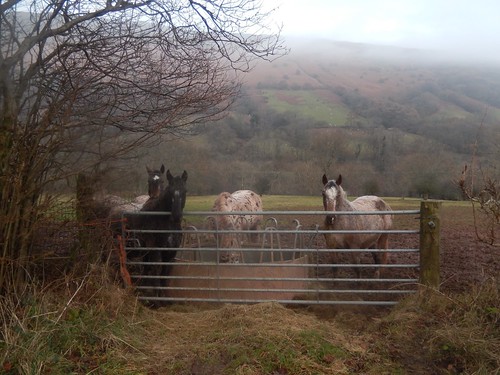 But, there wasn’t a waymark in sight. My best guess is that it wouldn’t meant negotiating these five hungry horses – and that’s after forcing their feeder out of the way so that I could open the gate… But, maybe the public right of way has been revoked? Perhaps this lack of waymarking is an unwritten warning for an atrocity of overgrowth at the valley bottom?… 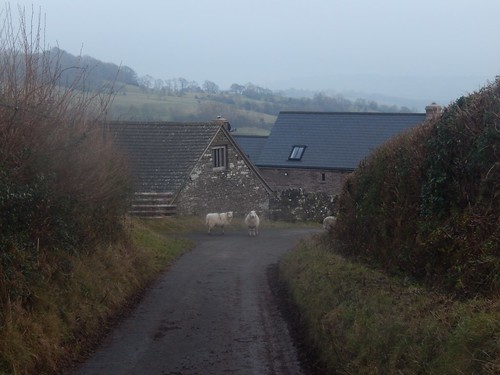 Anyway, I turned right along the road and returned to Geoff’s walk, where I encountered a few ‘free-range’ sheep at the road bend beside Olchon Court. 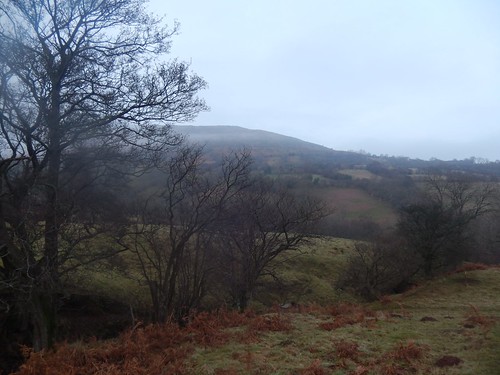 Black Hill – aka. ‘The Cat’s Back’ – was in sight. For the first time in several hours. 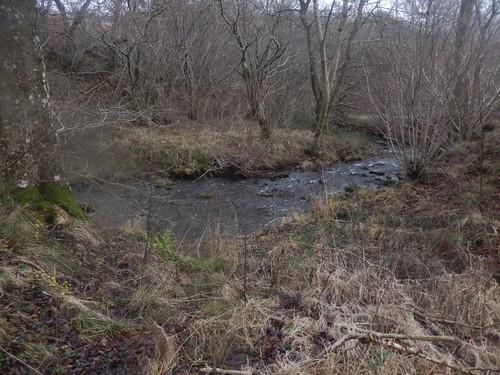 Then, began my descent, ahead of the inevitable climb. I followed the watercourse on my left, where the waymarking was actually very good. Like many other streams descending the mountains, this feeds the Olchon Brook at the foot of the valley. 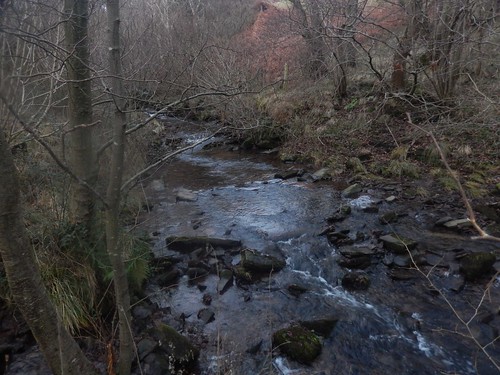 I felt a sense that this area may be under-appreciated, with the high peaks and rocky summits that await your average visitor. So much clean, running water. Just further south is the spring of Cae Thomas Well (although, it exists on private land with no right of way for the public). 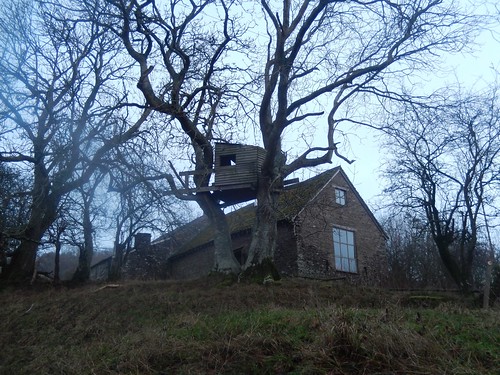 Over the brook via a footbridge and I began climbing up towards Blackhill Farm. This was well within the final hour of daylight for mid-December, making the ‘abandoned’ treehouse an extra-creepy spectacle. 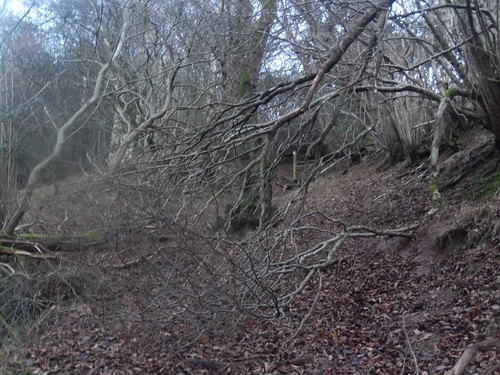 But this farm has no yard and I faced no encounters with either man or bovine beast. Waymarking was very good, even where the fallen branches threatened to impede upon my way. 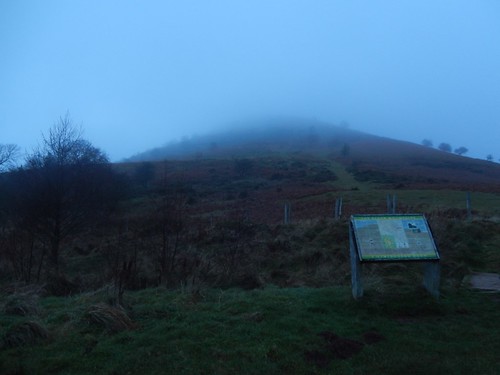 From the road, I faced a steep climb up the way I had driven in to the car park. Upon my arrival, there were four or five others cars parked alongside mine. A family (or two) were slowly descending from Black Hill. Still, I like to think that I had only encountered two others (plus one dog) on this walk. 😉 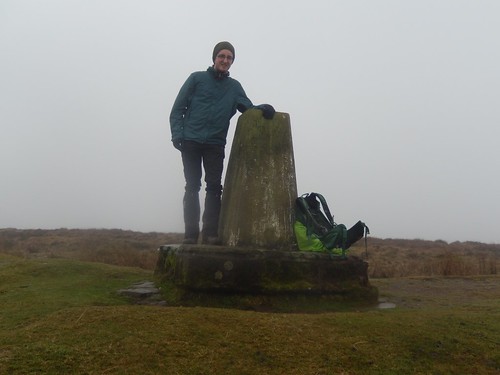 My first walk in the Black Mountains is now complete and I do look forward to my next, where and when ever that may be.