Since 2010, if it wasn’t 2009; I’ve been doing pretty much everything from a ‘less expensive’ laptop available from the Argos catalogue. Within the past two years, it’s been getting slower and slower. On top of that, I occasionally hear the fan inside crunching and grinding away… My laptop wasn’t going to last much longer and, even after backing up all of my files, I was going to need something new to work from.

As my laptop never actually leaves the desk, I decided it would make sense to invest in a PC. This has many advantages and I’d probably get a lot more for my money. Along with blogging and photography, I do a lot with YouTube, which is very demanding on hardware. Brief internet searches suggested that I should be looking for something with the specification of a ‘gaming PC’ and so, with a budget in mind, I decided on an:

My initial budget was £400. When I realised that Windows 10 would cost around £120 on its own, I decided to factor in a computer package that also includes an operating system (I’ve never used anything other than Windows).

It was October, when I finally made the purchase and took delivery of my huge-box-of-everything, several days later. This was after telling myself that ‘August would be a good time to make the purchase’… And September of 2016, long before!

Everything was well packaged and secure. I cannot fault that although, as I had to collect it from a DPD Pickup Point, I found the massive box to be very awkward and almost painful to carry down the road from my car. It was a tight fit in the boot of my estate car, as well. 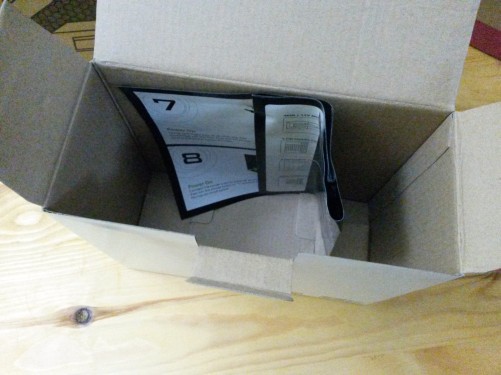 I was bemused to find nothing more than an instruction leaflet resting inside one unmarked box. Perhaps this box was added to maintain the integrity and structure of the package?

Nearly two months on and I’m quite happy with the main unit overall. I’m sure that, like all computers over time, it will eventually begin to lag and slow down. But, with a PC, I think it may be possible to replace and upgrade individual components, which I don’t believe is possible with any laptop.

I can hear it running but it’s not too noisy and I generally work with headphones on, anyway. My Acer laptop used to make a lot of fuss. I’ll probably looking at housing the main computer unit elsewhere so that I can retain desk space.

Personally, I don’t like the keyboard too much. Maybe I’ve been working from a low-profile laptop for too many years but I find it too easy to accidentally hit the wrong key. Also the Backspace key is tiny and my touch-typing fingers are struggling to adjust. Please bear in mind that I am not a gamer and that I do a lot of word processing for my blog. I think I’d prefer to have a keyboard with low-profile keys.

I’ve also had to stop using the mouse, as it has a strong tendency to click the right button without my finger even hovering over it. Too many times, I’ve accidentally lost browsing tabs. I’ve resorted to my old faithful multi-colour mouse. In the long term, I may look at a wireless option but I think I’ll steer clear of the Compoint brand.

I definitely won’t be using the headset as I already own a pair of headphones that I’m very satisfied with. They remain in an unopened box, ready to be passed on.

When I first switched on the monitor, I had to dramatically reduce the screen brightness immediately. It was around 70% and I now have it closer to 20%, which I find to be much more comfortable (I used a nearby floor-standing light for illumination). But, I think anyone using a monitor like this will need to invest in a monitor stand of some sort (my birthday present is working fine, for now). Without the book, I would find myself tilting my head forwards and encouraging a neck ache.

In my opinion, this is not a bad package, even though I’m under the impression that it resides towards the lower end of the gaming PC market. I had a budget of £400 and this (almost) fits within that. In an ideal world, I’m probably looking for a computer and monitor combo., adding my own selection of keyboard and mouse to compliment my own preferences (a bit like Pic’N’Mix). It’s also available with red in place of the green, should you feel hot and fiery.

I’m a little disappointed and quite surprised to find that my YouTube upload speeds and times have not improved – I guess that may be related to my router and broadband supply… Other than that, video editing and playback is so slick, compared to what I used to know.

I hope this has been useful. Thanks for reading.