In an continued effort to further reduce the clutter on the floor of my living room, I came up with the idea of setting my TV on to a wall-mounted bracket. My only caveat was that I live in rented accommodation and that I’m not allowed to fix anything to the walls, anywhere… Having recently moved an Ikea Hejne shelving unit in from the bathroom, I realised that I could happily mount it on to this.

END_OF_DOCUMENT_TOKEN_TO_BE_REPLACED

After moving in to a smaller flat last year, I quickly realised that I didn’t have the space for two of my Ikea Ivar shelving units. One was sold locally and, although I managed to squeeze the other in to the bathroom cupboard space, I soon decided that it was excessively deep and warranted downsizing. With that second Ivar unit sold, I had the funds available to purchase something more compact; again from Ikea, I went for the Hejne shelving unit.

END_OF_DOCUMENT_TOKEN_TO_BE_REPLACED

It was probably a couple of months ago that I went out and bought myself a new bed frame. Replacing my old one (which was given to me in 2011 and second-hand at the time) is something I’d been thinking about and, while I had aspirations towards making my own frame, I’m still lacking the facilities and space for doing much in the way of woodworking.

So, it was with another trip to Ikea that I would come away with the Neiden double bed frame.

END_OF_DOCUMENT_TOKEN_TO_BE_REPLACED

Today marks the six-year anniversary of this blog. It’s developed and re-developed quite a bit in that time and I’m grateful to those of you who have been following from the very beginning, along with everyone who has joined more recently. I will always write for as long as you are willing to read. 🙂 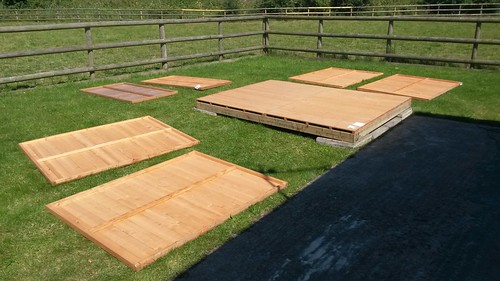 So, after constructing the base in two-hours on Friday afternoon; I decided to press on and see how far I could get building the shed itself, before the growl of my stomach became all too consuming and lured me away.

END_OF_DOCUMENT_TOKEN_TO_BE_REPLACED

Continuing straight on from Saturday’s efforts in the previous post; Sunday began with the finalisation of a few areas in preparation for the final assembly and glue-up of the rear ‘fixed’ portion of the folding desk.

I wanted to cut away a portion of each ‘foot’ so that it would sit more comfortably on a level floor and, as luck would have it, my under-used 6in diameter Sander Sitter provided me with the perfect radius. I cut the waste away with a jigsaw and cleaned it up a bit on my bobbin sander.

END_OF_DOCUMENT_TOKEN_TO_BE_REPLACED

Part 5 in my Picket Planters video series was uploaded to YouTube yesterday evening. I’ve dubbed it as the ‘penultimate’ episode in this particular playlist but, it may turn out to be the final video, as I realised (shortly after uploading) that I’ve mis-placed (perhaps, even, deleted) the final scenes of footage I recorded about two-months ago… 😳

All the ‘exciting’ stuff will have been witnessed, by the time you’ve finished watching this latest instalment so, you’re not missing out on much in the practical sense, at least, if this does end up being the last in the series. There’s only one scene that I can recall and that was basically me talking about the painted finish I had decided to go with – if the worst comes to it, I could always summarise that in an additional blog post, should the missing video footage not re-emerged (I have checked both of my SD cards).

As always, if you cannot get the video to load here for you on WordPress, please try clicking this link, which will take you directly to YouTube.

Comments are always welcome. I was actually quite pleased with this one. Alright, so I’m still about as vocal as a doormouse but, I thought that the animations and transitions between scenes worked very well…

With any luck, I’ll have another (more concise!) video series starting in a couple of weeks and, I’m also looking to round-off the long-forgotten Towel Stand Project in the near future… 😳

Remember that video series I started on making a pair of Picket Planters? Yeah, that was some time ago, back in the summer, now… After Part 3, I just sort of trailed off, couldn’t find the time to sit down and edit the outstanding [quantity, not quality!!] video clips on my computer. So, it’s been a very long while but, I am relieved to reveal that the fourth instalment in this series is now available for your viewing pleasure:

In this episode, I assemble both of the end frames, in preparation for a larger glue-up, next time.

Actually, it went live last night so, I apologise for the delay in bringing this information to your attention, if you weren’t already aware. There’s plenty of footage available for Part 5 and, as much as I’m hoping I’ll be able to wrap this series up with that, I can almost clearly see a sixth part to this on-going tale just over the horizon!

If the video isn’t working for you hear, please try clicking this link, which will take you directly to the page on YouTube.

Thank you for watching.

I’ve just finished uploading my latest video to YouTube! It’s the first in a short series on how I recently made a small batch of ‘end-grain’ cutting boards. I like to think there are some techniques that you won’t have seen before (in fact, I managed to avoid using my table saw throughout it all! 8-)) but, all comments are welcome; good and bad; both here and directly on YouTube.

Instalment number two isn’t very far away. All the footage has been loaded on to my computer and I just need to sit down and organise it all (the real time-consumer!). In my next series of videos, I’ll try to talk more… 😳 There’s not a lot I can do about the visual quality right now, unfortunately. It’s a bit of an experiment for me so, any feedback would be most greatly appreciated. 🙂

What do you like? What don’t you like? Is there something I could’ve done more of? Maybe less of that? I appreciate that not every woodworker will appreciate the sounds of Joe Satriani and Sammy Hagar among others…! 😉

Thanks for looking. Hope you enjoy the show. 🙂