Last weekend, I uploaded this selection of clips to YouTube. They were all taken during my thirteen-mile walk around Dovedale in the Peak District, back in September.

I hope you enjoy it. I found it really hard to find appropriate music that I’d not already used on a previous walking video so I have reservations and uncertainties over the track I picked from YouTube’s free music library. Feel free to let me know what you think.

My apologies to anyone expecting a video on Dovetails… 😉

Climbing out of bed around five-minutes later than intended, my goal remained to arrive in Bristol in time for a group-led walk around the Brecon Beacons… But the meeting point was in Clifton; an area I, for some reason, struggle to arrive at in time. This walk was no exception to that unwritten rule and so, arriving a good ten-minutes after others had supposedly departed, I was on my way home again, filling my head with negative and self-critical thoughts. 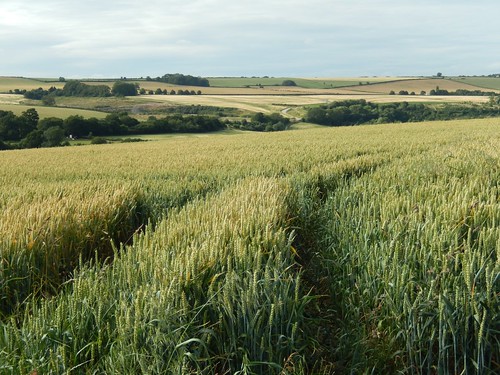 Somehow that morning, I managed to revolve my thinking in to a plan of action to set out on an afternoon walk that would most likely see me returning home a little late for my evening meal, but still safely ahead of nightfall. That’s when I settled upon a walk I’d drawn up weeks earlier, beginning in the village of Wellow (a few miles south of Bath), with by far the biggest attraction being the chance to finally visit Stoney Littleton Long Barrow along the way. END_OF_DOCUMENT_TOKEN_TO_BE_REPLACED

Saturday came and with it, the opportunity for me to lead my fifth (and final) Ramblers walk of the year. I’m pleased to say I’ve now done enough to have earned myself a £20 voucher at Cotswold Outdoor. In 2013, I lead a total of three walks to gain £10. This year, I’ve gone that extra bit further. What will 2015 bring?

It got off to a very foggy start as I set off from home.

END_OF_DOCUMENT_TOKEN_TO_BE_REPLACED

Earlier today, I uploaded a brand-new video to YouTube, which happens to be my first for about a month. I’ll probably go in to that one a little deeper in a separate blog post next week but it bears some relevance to this post where I’m going to be looking at mitres and tackling the seemingly-simple question of how to fit a length stop for repeat or batch cutting of identical lengths.

END_OF_DOCUMENT_TOKEN_TO_BE_REPLACED

This latest YouTube upload has already received quite a phenomenal response…

Within the first 24 hours, I think it had reached over 200 views but the staggering part was the sheer number of likes – all 42 of them!

My all-time record for a single video is somewhere between 40 and 50 and that arrived after several days, maybe even a week and many more views. A couple more days passed and that figure doubled!

Now, at the time of writing; I’ve received over 1,200 views for a video less than one week old and, wait for it…

I cannot thank people enough because those figures are astonishing! It’s gone a little bit viral and it’s hard for me to see why… But then, if I’m going to try and analyse this, I’d be missing the point when I should simply be trying to acknowledge and accept it. I’ve had some pretty well-known woodworkers following me back on Google+ recently which might also have helped, I guess. With this, comes an air of pressure and ‘expectation’… By setting such a high standard and attracting a new audience (very close to 1,000 subscribers now) with this latest video, I feel a little under pressure to keep that going and not to disappoint.

As I’ve said before; I’ve got a few months’ worth of video footage sat and waiting to be edited on my hard drive, which should help to keep my channel alive throughout the winter months.

If you haven’t seen it already, please enjoy the video. Feedback is always welcome and I’d especially like to know whether you would regard this piece as a plate or as a platter… 🙂

It’s hard to find the time to write regularly here at the moment. I have a couple of detailed posts I plan to write soon but those are the ones I mostly seem to aim for. For quick updates on more of a typical ‘blogging’ scale, I tend to use either Keek or my Facebook page. But I suspect that not everyone subscribes or visits there; not everyone has Facebook or ‘does’ social networking. So, I’d like to try and update you all with a few snippets of all the little things I’m working on at the moment.

END_OF_DOCUMENT_TOKEN_TO_BE_REPLACED

This post is most certainly off-topic. But, this is my blog after all. I’ve been ‘umming’ and ‘ahhhing’ for the last week about whether or not I should post it here and it’s taken me until now (22.30 on Friday night) to be able to sit down and to formulate this. Domestic abuse is a subject that’s very close to my heart. I’ll only go as far as to say that I’ve seen too much of it in my brief lifetime. One thing I am certain of is that there is no reason for it and, even where there is an excuse, well, I think you have to then ask yourself what the true definition of that word is because it cannot form an answer that would stand up in a court of law.

I’m going to write my response to recent revelations within the media as to the true nature of Charles Saatchi‘s character within a relationship with Nigella Lawson. If you do not wish to read on, that’s absolutely fine and I promise to make my next post about working with wood. 😉

END_OF_DOCUMENT_TOKEN_TO_BE_REPLACED

Part 3 and the concluding episode of my Contrasting Cutting Boards series was uploaded to YouTube on Sunday night. Already, I’ve had a very welcome response and, although they’re not everything; at the time of writing this post, I’m averaging one Like for every ten views… And I do like this! 🙂

It’s been quite an enjoyable series to film and I do feel that my editing skills have improved somewhat in the two-years since I made a set of beech cutting boards (another popular series). I found myself with more than one hour’s worth of footage to sort through for each one and I’m pleased that I was able to essentially quarter each of them.

I imagine I’ll pick up more tricks with practice as I can’t imagine the ‘pros’ (highly popular woodworkers on YouTube) allow themselves to climb such a mountain, each and every Friday. Steve Ramsey made an interesting comment recently (it might have been on Keek or in his most recent Mere Minutes video) where he basically stated how and why he tries to keep his videos short (between 5-10 minutes each). With longer videos, he’s found in the past that views tend to ‘drop off’. He also mentioned how the average viewer can kind of ‘make up’ the bits that you don’t show, in between scenes and I certainly feel as though there are only so many times in which someone can sit through a sequence of planing or ripping timber.

I’ve personally received a lot of praise for the detailed, descriptive nature of my content and I want to reassure anyone reading this that you’re not about to lose that in future videos! I do plan to highlight some shorter tips and ideas around the workshop, in between whatever projects I can muster between now and ‘the move’… I’m thinking about the possibility of doing a ‘rundown’-type video on this series. Again, similar to Steve’s Mere Minutes and it’s also something that Laney Shaughnessy and Alex Harris do quite regularly. I’d keep it within the same channel but it might be useful to just sit and look back on things, even if I don’t have many questions to explain or answer.

I’m reluctant to spend any fortune (big or small) on new filming equipment with the uncertainty that lies ahead but I am keen to try and add a narrative to some future videos, to try and counter-act the issues I sometimes have with my voice and speech.

Thanks again to everyone for watching, liking, subscribing and for being here to read this post. 🙂