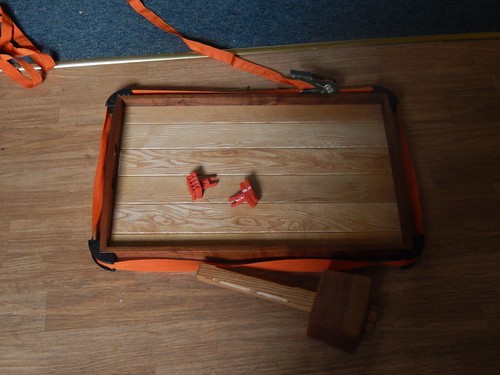 END_OF_DOCUMENT_TOKEN_TO_BE_REPLACED

If you’re subscribed to my YouTube channel then you’ll already know that I recently uploaded a video on the making of my magnetic knife block from last year. If you’ve noticed this upload appear twice in your subscription feed then it’s because I have re-uploaded the same video – in the first edition, I was made aware (by several viewers who left comments) that there was an issue with the narration running out of sync and beyond the end of the video footage; prolonging the length with an additional minute of black screen.

This has been corrected in the second upload. I’d like to leave the original video in its place because it’s already received a number of interactions. What I realised was that I made a mistake in recording and positioning the segments of narration before a final edit of the individual scenes – let that be a lesson to any other YouTubers or video-uploaders out there! It seems as though the strips of narration are not attached to the video timeline and so, as that shifts, the audio remains where it was.

So, from now on, this is the kind of schedule I’ll be following when editing a video for uploading. It is a lengthy process and I like to save as many individual versions of the video in as many states as you see listed below:

1. Initial edit and trimming of scenes.

3. Playing through the video to check and increasing the play-speed of any scenes where appropriate.

4. Recording and adding the narration.

5. Adjusting the sound levels between scenes and narration before a final check and then, the uploading!

Thanks for reading and I hope you like it. 🙂

On the stroke of Christmas Day (literally, as midnight arrived to close Christmas Eve), this video was uploaded to YouTube. It’s had a great reception already; tallying up to more than 850 views already, which is great by my own standards. But I’d like to bring it to you attention today, as many people have will have been busy over the Christmas period. This is mainly for those who haven’t already seen it.

It took about 90 minutes to upload for a 13 minute video. It’s a standard time for my work (in HD quality, 720p) but it always seems excessive. I’ve noticed other woodworkers and YouTubers who are seemingly able to upload videos in a matter of minutes… I guess it’s down to the power of your computer and its processors. I’ve recently got myself re-established with broadband and the speeds are pretty good. If I come to do this more frequently, I would have to look at upgrading my laptop then.

So, I made two of these boxes, as I’ve developed a knack for making two of everything this past year. One went to a friend for their birthday in August; the other remains ‘on display’ in my home, alongside the spare yin-and-yang box – which will also appear in video format sometime in 2014!

Thanks for reading and for watching. As always, I welcome all feedback.

It’s already the middle of September! About a month ago, I was finishing off a pair of end-grain cutting boards… Not my first of the year but I wanted one of these to go to a friend for her birthday (she previously expressed an admiration for the ones I made earlier this year). Instead of doing another video on the making of these, I decided to instead document it here on my blog. It’s been a while since I’ve written about a project like this.

These really don’t take very long to make, especially as I’ve had two previous attempts at ‘practising’ in the last couple of years. This post may end up quite a long one though, as I did happen to capture very many images along the way.

END_OF_DOCUMENT_TOKEN_TO_BE_REPLACED

I can’t remember exactly when I last blogged about making a guitar but I do recall (probably last year, when I purchased two sets of plans – or was that 2011?!) stating my intention here on at least one prior occasion. it’s been an ambition for the last, say, three-years and it’s only really in the last year that I’ve been able to build my confidence up to a level at where I feel fairly competent in having a go.

I would like to reiterate that I do not currently play a guitar; I have never played a guitar and I really don’t know much about them… From the three sets of plans I’ve now purchased (from JAGuitars), I’ve chosen to go with the Gibson SG style (my latest buy) simply because, to my eye, it has the most attractive and appealing aesthetics! Plus, while Googling for user-made replicas a while back, I came across some walnut SGs that looked quite stunning… And I still have more than enough walnut left over from a near-£300 purchase back in April. 😎

This is my first video in what is going to end up a series of indefinite length. There are questions over whether or not I’ll be able to finish this before November comes – I mean, it’s taken me about two months to complete the templates, to upload this video and now, I still haven’t ordered the necessary hardware or figured out exactly what I need to buy!

My current plan is to get the ‘workshop stuff’ (machining and hand tool work) complete before the inevitable cold snap arrives; regardless of where I’m living and where my tools are likely to end up at that time. I can imagine myself French polishing on a kitchen table if I have to (I dislike ‘plastic’ lacquers and, well… I made that table!!)… If it comes to it. To my mind; strings, straps and even scratchboards [if that’s what they’re called] can be fitted afterwards. I could even do that sat on a living room sofa with 8in of snow underfoot outside!

Anyway, I hope you like my ‘introductory’ video to this project. I have unnecessary trouble in uploading this one because my editing software decided to shuffle the order of scenes as I as working through my final cut! But, on Saturday night (Sunday morning), it did reach YouTube just after 1am and it’s been very, very well received since. Thanks largely in part to this video (along with your own efforts and contributions), I’ve now surpassed the 700 marks for subscribers to my channels. I feel as though I’m well on course to reach 1,000 before December! 🙂

While I’m pressing on with various things at the moment, I recently came up with an idea for a magnetic knife block design that I might like to make for my own personal use. I was asked about making a universal knife block a few months ago. Typically, those are fitted with carbon fibre rods or sometimes bamboo skewers. I couldn’t find a supplier of the plastic rods but that one didn’t come in to fruition anyway. Someone else later asked me about magnetic blocks (where the knives stick to the side of a block) and that’s what got me thinking with this design.

I’ve grown up in a house with ‘common sized’ slots in each block. But how do you know what knives you’re going to need? Their size. Their quantity and what if my future plans change and I really want to get in to cooking and preparing food? That’s where I like these ‘unrestricted’ designs.

My own brief illustration is quite typical of what you might expect from an upright magnetic block. I see it as an opportunity to use up some scrap wood, with an interior constructed of offcut strips in a stack-lamainated formation, one on top of the other. With end-grain exposed at the ‘front’ end of the block, it could become quite a feature. There would be magnets embedded in to either side and these would then be sealed behind a thick veneer of something – in this case, I’ve drawn it in brown but I quite like the appearance of lighter woods (maple and sycamore) in a kitchen environment.

Both the shape and dimensions are only approximate at this time but, each time I head out to the workshop, I feel a desire to come up with a few scrap wood projects before I end up giving the stuff away!

Part 3 and the concluding episode of my Contrasting Cutting Boards series was uploaded to YouTube on Sunday night. Already, I’ve had a very welcome response and, although they’re not everything; at the time of writing this post, I’m averaging one Like for every ten views… And I do like this! 🙂

It’s been quite an enjoyable series to film and I do feel that my editing skills have improved somewhat in the two-years since I made a set of beech cutting boards (another popular series). I found myself with more than one hour’s worth of footage to sort through for each one and I’m pleased that I was able to essentially quarter each of them.

I imagine I’ll pick up more tricks with practice as I can’t imagine the ‘pros’ (highly popular woodworkers on YouTube) allow themselves to climb such a mountain, each and every Friday. Steve Ramsey made an interesting comment recently (it might have been on Keek or in his most recent Mere Minutes video) where he basically stated how and why he tries to keep his videos short (between 5-10 minutes each). With longer videos, he’s found in the past that views tend to ‘drop off’. He also mentioned how the average viewer can kind of ‘make up’ the bits that you don’t show, in between scenes and I certainly feel as though there are only so many times in which someone can sit through a sequence of planing or ripping timber.

I’ve personally received a lot of praise for the detailed, descriptive nature of my content and I want to reassure anyone reading this that you’re not about to lose that in future videos! I do plan to highlight some shorter tips and ideas around the workshop, in between whatever projects I can muster between now and ‘the move’… I’m thinking about the possibility of doing a ‘rundown’-type video on this series. Again, similar to Steve’s Mere Minutes and it’s also something that Laney Shaughnessy and Alex Harris do quite regularly. I’d keep it within the same channel but it might be useful to just sit and look back on things, even if I don’t have many questions to explain or answer.

I’m reluctant to spend any fortune (big or small) on new filming equipment with the uncertainty that lies ahead but I am keen to try and add a narrative to some future videos, to try and counter-act the issues I sometimes have with my voice and speech.

Thanks again to everyone for watching, liking, subscribing and for being here to read this post. 🙂

If I look back, it’s more than three-long-years since I last splurged a serious amount of money (more than £35) on a quantity of sawn hardwoods! That’s quite a saddening statistic that makes me question what the heck I’ve been doing since I bought all that ash and walnut for the chair in my final year of college.

That ended this morning, with a trip to Oscar Windebank in Box (between Bath and Chippenham).