Inspired by this recent video from Ana White, I’ve spent a short space of time over the weekend thinking about a window-style mirror that I make for my flat.

It’s an old building with windows only down one wall (one in each room), as another building backs on to this. With high ceilings, it can also get dim even with the lights in full glow and, while I’ve had an idea to source a large mirror to help disperse more of the limited natural light, it may cost about the same for me to just make one.

END_OF_DOCUMENT_TOKEN_TO_BE_REPLACED

Today, in the woodworking world, it’s the annual fund-raising, Cancer-fighting charity build. Take a look on YouTube and you’ll find (from my reckoning) more than 20 people who’ve already supported this cause by uploading videos of the projects they’ve been working on. Below, I’m going to share with you three of my favourites – although that’s not to imply that I’m even halfway through my Watch Later list!

To learn about the cause and its origins, please head over to The Wood Whisperer’s site.

END_OF_DOCUMENT_TOKEN_TO_BE_REPLACED

In my last update, I believe the pair of book boxes I was making were edging close to completion (or, at least, the finishing stage). That was over two-months ago and, even though I’ve since effectively closed the door on that workshop for the time being, I can tell you that I worked on three separate (and a-little-bit-secret) items during the closing weeks. 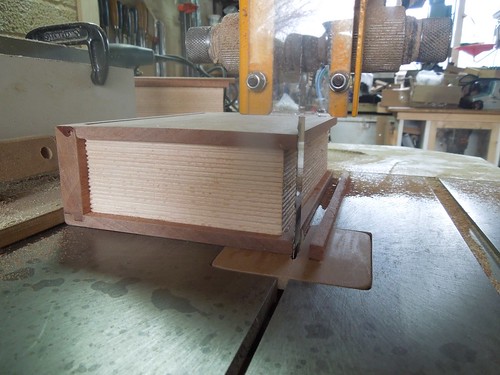 Today’s update concludes the book box project for the time being.

END_OF_DOCUMENT_TOKEN_TO_BE_REPLACED

I haven’t written much about woodworking for a while. As you’re probably aware, I moved home not long ago and, for an indefinite amount of time, I still have access to the place where my tools are currently stored… I just don’t seem to have enough of the time, money or weather at the moment! But I am still keeping two projects on-the-go and, to be fair, they’ve been in said state for a while. This is what I wanted to share with you this evening.

END_OF_DOCUMENT_TOKEN_TO_BE_REPLACED

Whenever I’m working on something, I always seem to have two other projects running at the same time. You might already be aware that I’m making a folding meditation stool and you’ve probably seen in recent weeks that I’m slowly making progress on a pair of chess boards. But what you won’t have seen much of is this third project, which I’ve only really started this week.

END_OF_DOCUMENT_TOKEN_TO_BE_REPLACED

It’s already the middle of September! About a month ago, I was finishing off a pair of end-grain cutting boards… Not my first of the year but I wanted one of these to go to a friend for her birthday (she previously expressed an admiration for the ones I made earlier this year). Instead of doing another video on the making of these, I decided to instead document it here on my blog. It’s been a while since I’ve written about a project like this.

These really don’t take very long to make, especially as I’ve had two previous attempts at ‘practising’ in the last couple of years. This post may end up quite a long one though, as I did happen to capture very many images along the way.

END_OF_DOCUMENT_TOKEN_TO_BE_REPLACED

While I’m pressing on with various things at the moment, I recently came up with an idea for a magnetic knife block design that I might like to make for my own personal use. I was asked about making a universal knife block a few months ago. Typically, those are fitted with carbon fibre rods or sometimes bamboo skewers. I couldn’t find a supplier of the plastic rods but that one didn’t come in to fruition anyway. Someone else later asked me about magnetic blocks (where the knives stick to the side of a block) and that’s what got me thinking with this design.

I’ve grown up in a house with ‘common sized’ slots in each block. But how do you know what knives you’re going to need? Their size. Their quantity and what if my future plans change and I really want to get in to cooking and preparing food? That’s where I like these ‘unrestricted’ designs.

My own brief illustration is quite typical of what you might expect from an upright magnetic block. I see it as an opportunity to use up some scrap wood, with an interior constructed of offcut strips in a stack-lamainated formation, one on top of the other. With end-grain exposed at the ‘front’ end of the block, it could become quite a feature. There would be magnets embedded in to either side and these would then be sealed behind a thick veneer of something – in this case, I’ve drawn it in brown but I quite like the appearance of lighter woods (maple and sycamore) in a kitchen environment.

Both the shape and dimensions are only approximate at this time but, each time I head out to the workshop, I feel a desire to come up with a few scrap wood projects before I end up giving the stuff away!

I’m writing this post to ask whether anyone reading this can guess what I might be making?

It’s a way to use up my collection of American lime (basswood) offcuts (although, that has little relevance). I’m stack-laminating them in such a way because I do not have anything as substantial available as a stock size. I think I’ve added two more layers since taking this photo but the height or depth is not critical.

Obviously, once I’ve finished laminating, I’m going to have to cut it in some way, if you notice all the overhang…

Thank you for reading. I look forward to reading your suggestions! 😉