Here on my blog, I receive a reasonable number of hits on a regular basis, regarding a few specific search engine terms that include ‘halogen oven’.

One of these involves air-frying – or, more specifically; the optional air-frying attachment that can be purchased for most 12lt ovens.

With this in mind, I recorded a video several weeks ago and, on Monday evening, I go around to completing the editing process and uploading my brief introduction to the use of an air-frying attachment in my halogen oven.

I do hope this video is of use to others and, if that is the case, I will look to record further footage on the use of the halogen oven.

I’ll have some more food-related features in the coming days but this evening, I’ve decided to share a walkthrough on how to replace the bulb inside a halogen oven, as there’s a good chance it may help someone else. 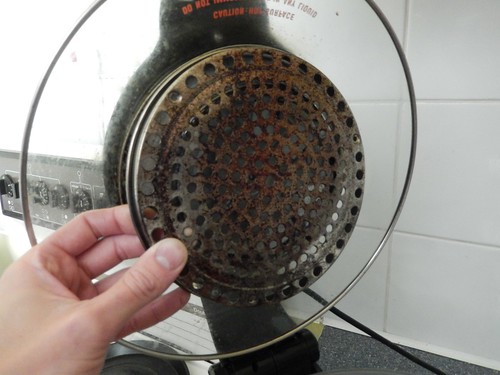 In all fairness, the manual for mine (Andrew James 12lt Premium) wasn’t too bad and in case you’re wondering; I believe I bought this back in March, around the time of my birthday and the original bulb has only just ‘blown’ this past weekend, meaning it’s lasted almost 7 months after fair usage (assuming it was new to start with).

END_OF_DOCUMENT_TOKEN_TO_BE_REPLACED

This will replace the Nikon COOLPIX S8200

(a slight upgrade, then) that I tried to repair a month ago, before conceding defeat and handing it over to the professionals at Nikon… To keep that story brief; their technician determined that there was too much damage already done and that the camera was beyond economical repair.

In all the time that I was waiting for a response, I could’ve just purchased a new camera but they did eventually come up with a pair of Exchange Offers – one being an A-grade refurbished S8200 (admittedly, it would’ve been dearer than buying one new from Amazon); the other was a ‘bridge’ camera (which I understand to lie somewhere between a compact camera and a digital SLR, but also refurbished).

I quite liked the look of this Nikon Coolpix P520

, especially considering that it would’ve only been a fraction dearer than the £150 I’ve just payed for my new camera and that it would’ve been unattainable brand-new, given its RRP. It was only when I began to read the reviews that I realised it had issues that would’ve irritated me – most notable, concerns over the camera’s inability to focus with clarity with the extensive zoom lens. But along with that, several comments suggested that there may be a delay or pause between simple functions such as taking one photo and preparing for the next.

Before my water bill arrived this week, I was thinking of going for a low-end DSLR, which might have cost between £300-400, at a guess. But I then began to consider what I would most like to use it for (walking) and I made a strong decision to stick with a compact that’s cheaper to replace and, I’m sure, a lot easier to carry over long distances and hills.

Speaking of which, I plan on buying a waterproof carry case for this camera; preferably with pockets for SD cards and storage. I won’t be preparing a full review of this model because I don’t consider myself to be ‘all-that-technical‘ when it comes to photography… I doubt I’ll even use half the features of this one, as with every other camera I’ve owned. I was a bit disappointed that the S9400 uses different batteries to my old S8200 (so, I’ve already ordered a spare) and while I’ve found the Coolpix range to be great at shooting in levels of low light, this one seems to compensate automatically by upping the white balance. It may not sound like a bad feature to have but my previous one didn’t do this. Having taken some sample shots of my flat (which has pretty poor lighting and a minimal allowance for daylight), I can see it giving a false representation of what my home truly looks like. I also found that a couple of features (which I would deem to be optional) were set to ‘On’ as default and so I had to work through the menus to disable them (not much of a challenge, given that I’m already familiar with the Nikon Coolpix interface).

I’m hoping to take this one out for a debut walk this weekend. I’ve never owned a white camera before and only went for this because it was significantly cheaper than the other colours. It’ll be interesting to note the colour changes throughout the rest of 2014. Hopefully, I’ll have fewer grubby smart phone shots to share from here on! 😉

Thanks for reading and happy snapping!

That’s my motto for this story I’m about to share. A tale that only ends in woe, as I strive to replace an important piece of my Nikon Coolpix S8200 digital camera… A quest of penny-pinching, that eventually ends in achieving the greatest debt possible.

END_OF_DOCUMENT_TOKEN_TO_BE_REPLACED

This post is about decluttering in the home; a subject that a friend opened my eyes to on her own blog. In the past, you may’ve read about my efforts this year to ‘declutter’ my workshop and the impending ‘loss’ of such a feature of my life has only helped to encourage that. For whatever amount of time I have left, I enjoy my time and my space that much more for the reduction of clutter and sheer reliance only on the more-essential of items. I no longer have to worry about that spray gun I hadn’t used since 2009, or the duplicates of cordless drills lying under almost every shelf. I’ve gained money that I can reinvest in more meaningful areas.

In all of this though, it is important not to neglect home. I have systems that allow me to keep order of various items. To me, they’re organised. To others, they appear chaotic. Whatever my own beliefs; I only allow them to grow and they end up cluttering my floor space.

END_OF_DOCUMENT_TOKEN_TO_BE_REPLACED

Tonight, I’d like to have a little moan about technology, which is usually something I’m in full praise of. This particular issue has been on my mind for several weeks and you’ll have a good idea of where I’m headed with this from the photo below.

As I began to write this post, I’ve just received an e-mail from a customer… It’s made me feel a bit sick inside. It’s not something you would like or expect to see as a maker and I do sincerely hope it’s just a one-off. It’s not their fault and, when I can find the word to reply, I’ll have to acknowledge that it is my responsibility. I might well bring this up in a separate post sometime but, as of right now, I haven’t yet figured out how it could have happened… Mystery, is the word!

END_OF_DOCUMENT_TOKEN_TO_BE_REPLACED

My next video on YouTube should document the making of a small picture frame made from a minute quantity of English walnut. Today, I’m going to share with you a bit about making the mitres on each of the four corners, as I took an opportunity to try and saw blade I’d not tested before and I’d like to share some of my thoughts on that.

I also decided to make a mitre-cutting jig for my mitre saw and there will be a shorter video showing how I made that, to be uploaded within days of the picture frame project going live.

END_OF_DOCUMENT_TOKEN_TO_BE_REPLACED

It’s official. I am now a fan of Abranet abrasives!

I only wish I’d invested in their discs sooner… As in, before I started sanding those cutting boards!