Earlier this week, I felt an urge to write about this. Everyone’s talking about COVID-19, the pandemic, how we’re all responding to it… But through not allowing myself that time in the moment, I’ve since lost the incentive to write. However, I now have the time and I’m deciding to write.

I usually refrain from writing publicly about anything related to politics. I have no personal preference or leaning towards any party (although there are some I lean away from). Almost daily, we’re seeing and hearing people complain about the UK government’s handling of affairs since the start of the year; since Lockdown Life was thrust upon us in March and since those restrictions were then eased.

I don’t wish to defend any individuals with my words – we all know that what Cummings did in travelling an unreasonable distance during Lockdown was ‘wrong’ on a different scale. Then, he was backed by his buffoon of a Prime Minister… But the fact remains that no party leader has lived through a situation quite like this before. It affects everyone. All over the globe.

I do feel that rules and laws toward the wearing of masks, for example, should been instilled in the very beginning. I also believe that the Tories (can you tell I’m not a fan?!) are more concerned with the economy (we’re falling in to a Recession) and perhaps their own personal gain, than they would be the lives and wellbeing of average people who’s taxes and strife fulfill for their many benefits. It is possible that a leader from another party might’ve acted differently – although, you could argue that many other nations around the world have been as ‘slow’ to respond.

What I wanted to get across is my belief that going in to Lockdown every few months isn’t the answer.

Right now, I believe some 25% of the UK is in a state of localised Lockdown, including the majority of South Wales. It seems like only a matter of time before this situation spreads to other (if not all) corners of Britain. But staying indoors, avoiding people and not going out won’t ‘defeat’ a virus. Certainly, it may reduce the rate – which I understand is probably a key intention, with the possibility that the NHS could quickly become overwhelmed with demand. But once those in Lockdown are allowed out again – just as what happened from June onwards; the number of recorded cases each day, week and month will steadily increase.

Don’t get me wrong. I spent seven or eight weeks on furlough between the end of March and May. Not having to get up and go somewhere yet still getting paid for it… There were positive feelings that came with that! But socially, it was a killer and then going back to work and re-adapting to that routine; well, if you’ve experienced it yourself, you’ll probably agree that it was not easy. I like the idea of having “another break” between now and Christmas (the next mandatory interruption to working life). But stuttering on through a stop-start cycle of lockdown for an indefinite period of time… Honestly, does not appeal to me.

There is a suggestion that we could see a vaccine available in the new year. Even if it is successful, it could take the rest of 2021 before every resident receives their dosage.

People are cunts. There will always be those who feel that they “don’t need to wear a mask” and those infuriating souls who want to believe that “it’s a hoax”. They do ruin it for the rest of us – perhaps more so than any law-evading politician.

I don’t know what the long term answer is and I don’t believe there is a person on this planet who could provide an effective answer without a shade of doubt. I do believe that we need to find a way to accept the situation, the threat, the risk. To be considerate towards other people and to ourselves. Slowly but surely, I believe that many people can find a way to work with this. Some business will suffer. Change is inevitable. No-one has ever said that this would be easy. But fighting it, denying and refusing to accept will only make things harder.

Anyway. Thanks for reading.

While assembling the two Rast chest of drawers that I’d purchased from Ikea, I needed to be able to increase the height of my Neiden bed frame for them to fit underneath.

Here, I’ll be sharing what and how I did that.

END_OF_DOCUMENT_TOKEN_TO_BE_REPLACED 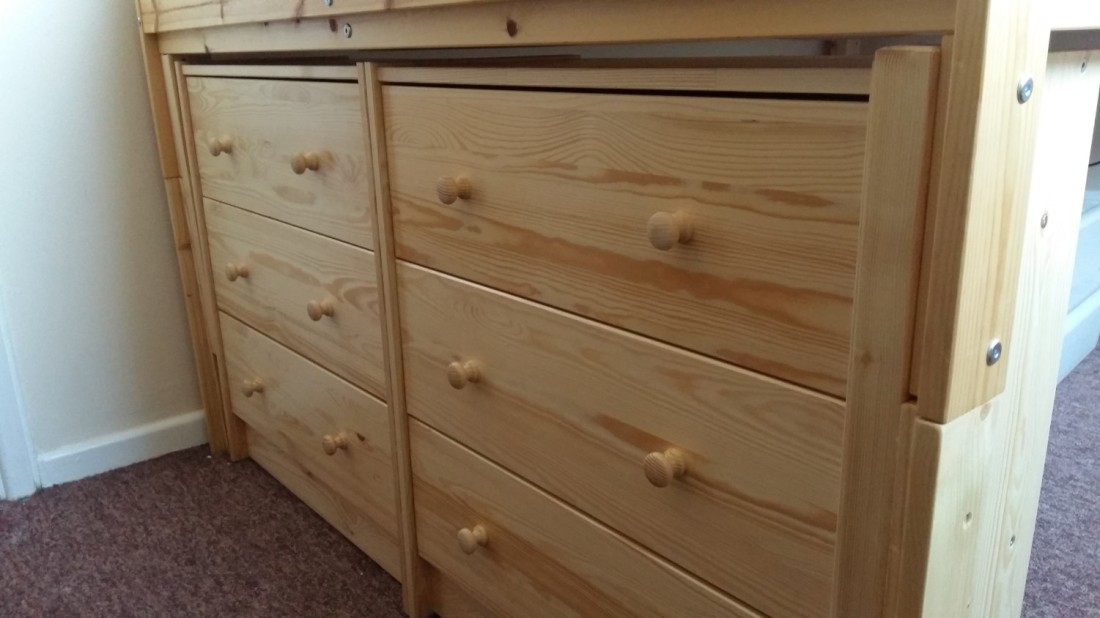 END_OF_DOCUMENT_TOKEN_TO_BE_REPLACED

In an continued effort to further reduce the clutter on the floor of my living room, I came up with the idea of setting my TV on to a wall-mounted bracket. My only caveat was that I live in rented accommodation and that I’m not allowed to fix anything to the walls, anywhere… Having recently moved an Ikea Hejne shelving unit in from the bathroom, I realised that I could happily mount it on to this.

END_OF_DOCUMENT_TOKEN_TO_BE_REPLACED

After moving in to a smaller flat last year, I quickly realised that I didn’t have the space for two of my Ikea Ivar shelving units. One was sold locally and, although I managed to squeeze the other in to the bathroom cupboard space, I soon decided that it was excessively deep and warranted downsizing. With that second Ivar unit sold, I had the funds available to purchase something more compact; again from Ikea, I went for the Hejne shelving unit.

END_OF_DOCUMENT_TOKEN_TO_BE_REPLACED

For those of us who’ve work in manual and physically demanding jobs, it may be fair to say that we’d be able to conjure up a similar image when pressed to describe the features and appearance of ‘work clothes’. Attire we wouldn’t wear to a formal occasion. We might wear it for an evening after work but not at a weekend, unless we’re actively doing something work-related. Splashes of paint, worn logos, the occasional hole or tear and de-elastication. These garments are unlikely to be brand new.

END_OF_DOCUMENT_TOKEN_TO_BE_REPLACED

I’m sorry it’s been so very long since I last wrote on this blog. While it’s not an excuse or reason for this absence, I’ve gone through the process of moving home, over the past month. In this post, I’m going to share with you some views of my new home.

END_OF_DOCUMENT_TOKEN_TO_BE_REPLACED

For this post, I’d like to share details and thoughts around what I’ve been doing for work and employment over the past year. It’s something I don’t often talk about as I’ve rarely been someone who enjoys or looks forward to spending five-days of their week in one situation, with only two days to then rest and recover before starting again.

While I write this, I’d like to make it clear that I am not writing with any intent to discredit any of my employers or co-workers, past and present. These are merely my views and experiences of how I have reacted and felt in certain situations.